Lauren Stephens: I’m proud to bring the US champion’s jersey to American racing 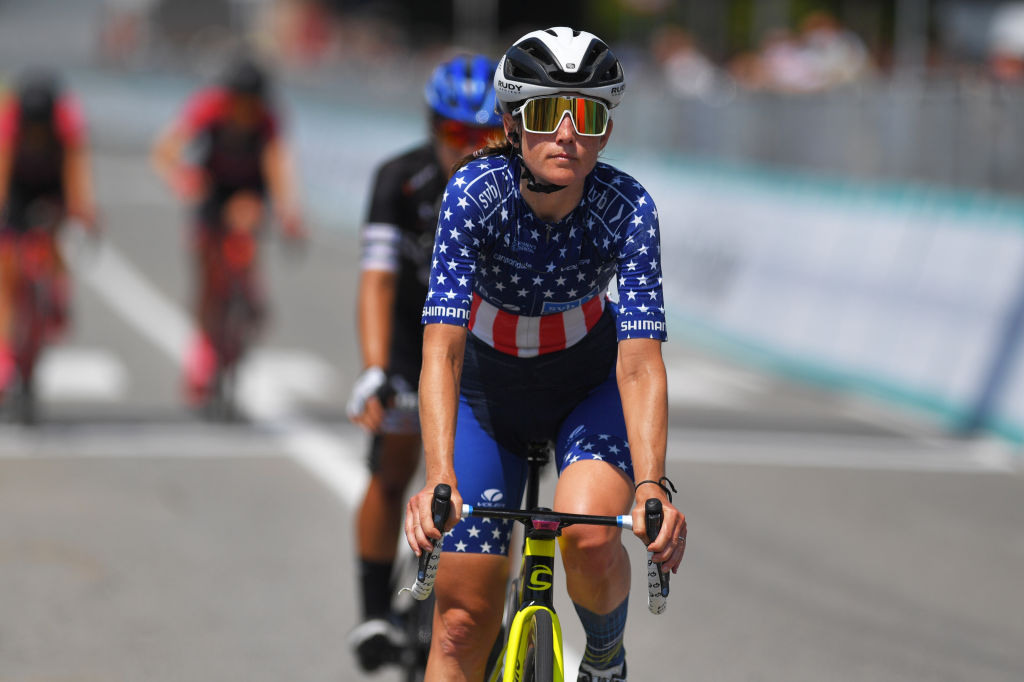 US road champion Lauren Stephens (TIBCO-Silicon Valley Bank) will line in a stage race on American soil at the Joe Martin Stage Race for the first time since the COVID-19 pandemic shut down racing early last year.

In an interview with Cyclingnews, Stephens said that she is proud to wear her new stars-and-stripes jersey at a home race and that she is prepared to win the overall title in the four-day event held from August 26-29.

“I wore my new jersey at La Course and at the Giro d’Italia Donne, but not in a road race win the US, yet. It was really cool how many people were coming up to me in the peloton and congratulating me for winning the jersey,” Stephens said.

“What I had accomplished started to settle in. It’s an honour to get to wear this jersey and a privilege. I feel like I’ve been in the sport for a long time, so people look up to me, but when I wear this jersey, I know that I’m representing America and that I’m an example for our sport, and I want to bring honour to that role.”

Stephens won the road title at the USA Cycling Pro Road Championships in Knoxville, Tennessee in June, before departing to Europe to race La Course and the Giro d’Italia Donne. Although she has competed in a selection of stateside gravel races, Joe Martin Stage Race will be the only road racing event in which she will compete for the remainder of this year.

“This will be our first national-level road race, outside of the National Championships, since COVID-19,” Stephens said. “It’s exciting. It’s also the first official race in the US where I’ll be wearing my national champion’s jersey. I’ve been wearing it in gravel races because there are no rules and you can do what you want, and promoters appreciate you wearing it. This is the first race on US soil that I’m getting to wear the jersey.”

Stephens won the overall title at Joe Martin Stage Race in 2014 and 2015, and last competed in it in 2017. This year, she aimed to win a third elite women’s title before heading back overseas to resume her late-season European campaign.

“As an American team that races mostly in Europe, we find it really important to still come to these American races and we expect to win the race this weekend. I feel confident that I can win it again. I’ve had a strong training block with the gravel races and this will be a good fine-tuning before going back to Europe.”

When she arrives back in Europe, Stephens will target the the Tour de l’Ardeche from September 8-14, a race she won last year, the UCI Road World Championships at the end of September, where she is an automatic qualification to the road race, then Paris-Roubaix on October 2 followed by the Women’s Tour from October 4-9.

TIBCO-Silicon Valley Bank have announced that it will file an application for a Women’s WorldTour licence in 2022. Owned and managed by Linda Jackson, the team has secured the additional funding through its existing partners to pay for the heightened financial requirements, such as increased rider salaries, to be part of the top tier of women’s teams.

“Linda has invested in this team for many years and her goal is to have the best women’s team in the US, and eventually in the world, and I’m proud of her and that she’s been able to find the funding,” said Stephens, who has been part of the team since 2013.

“She’s moving this team to the next level and it’s a huge accomplishment for her. I’ve been on this team since 2013 and with our loyalty to each other, it’s exciting to see her moving the team up to the next step.”

Why Customer Support Should Be Your #1 Event Tech Feature

How To Do Pull-Ups, According to Two Trainers