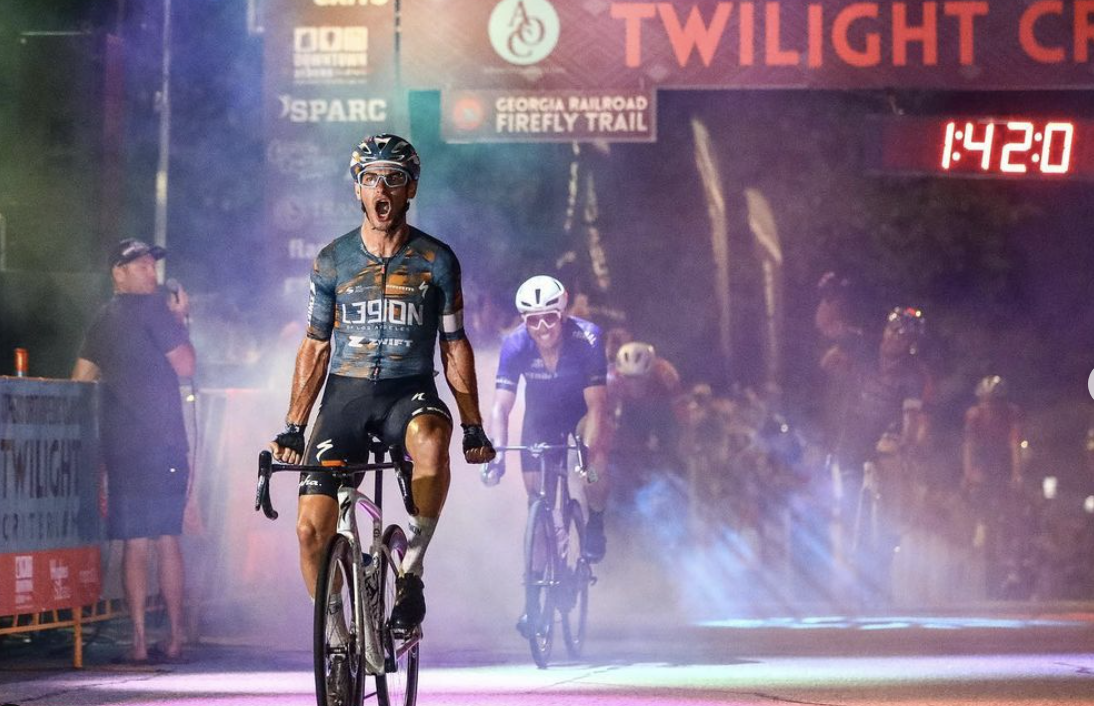 Skylar Schneider and Tyler Williams were part of multiple-rider attacks by L39ION of Los Angeles to win the pro races Saturday night at the Athens Orthopedic Clinic Twilight Criterium, in its 41st edition.

Both the women’s and men’s pro events saw aggressive racing with lead groups that would lap the fields in both races, with the women’s breakaway lapping up twice.

Schneider and teammate Kendall Ryan worked at the front to jolt the peloton halfway through the hour-long women’s race. They were part of the first group of seven riders to lap the field. After a pause with 14 laps to go, the L39ion duo attacked again with the previous breakaway companions Maggie Coles-Lyster (DNA Pro Cycling Team) and Rachel Langdon (InstaFund Racing) and Caroline Bauer (InstaFund Racing), with Olivia Ray (Rally Cycling) following.

With a thunderous accompaniment of the cheering crowd and Aretha Franklin’s “Respect” on the long 300-metre section through the start-finish line, Schneider led the way with three laps to go to catch the main field a second time, now down from 88 riders to less than 20. She would stay out front to win going away from Coles-Lyster, who took second, and Langdon would follow for third. Only six riders finished on the lead lap, with 14 riders at one lap down.

“It’s a dream come true to win Athens Twilight. We did it,” Schneider wrote on her Instagram feed.

Having won the Spartanburg Criterium on Friday night that is also part of the USA CRITS, Schneider moved into the top position as Lap Leader for the series, while Langdon extended her points as the Individual Leader in the overall standings. Coles-Lyster is just ahead of Schneider in the Best Young Rider category.

“Man, I really wanted [first place] but came up short against the beast Skylar Schneider. First time racing Athens Twilight , and the race, the crowd, everything was simply incredible,” Coles-Lyster reported on her social media feed. “The DNA Pro Cycling squad raced beautifully and we came out top team of the night and my first time lapping the field in a crit was a pretty sweet way to get second.”

The hot, muggy Southern night continued with 80 laps of racing for the men. Twenty laps into racing, six riders went off the front, in what would prove to be decisive later – a L39ION trio of Alec Cowan, Eder Frayer, and Tyler Williams, along with Michael Hernandez and Danny Summerhill of Best Buddies Racing, and Spencer Moavenzadeh (ButcherBox Cycling). Missing out on the move was USA CRITS overall leader Thomas Gibbons (Automatic Racing).

The chase was led most of the night by Team Medellin EPM, who brought six riders to the event. Midway through the race, the fierce pace had reduced the main field from 137 riders to just under 50.

Over the next 25 laps, the two groups out front of 11 riders had lapped the field. A solo attack by L39ion’s Frayer was unsuccessful as he slid out in a corner. With three laps to go and just 28 riders left in the race, Cowan took his turn at the front as a lead-out for Williams and Magner, with Williams having enough left in the tank on the final lap for the win.

“This was the best crowd of the year. We wanted this one for Ty [Magner], it’s his hometown and we set it up for him. We tried to set it up for him and in the end it came down to getting the job done. It’s a selfless team. I got the lucky job of just finishing it today. We needed to right yesterday’s wrong,” said Tyler Williams after the race, referencing his third-place finish at the Spartanburg Criterium from the night before.

Oyola, who crossed the line in the top five, was disqualified by officials for having his Medellin teammates drop back from the field to help pace him in the breakaway to lap the field.

Gibbons was the best of the rest, one lap down, and finished 11th. It was enough for him to retain points as the USA CRITS Individual Leader, with Tyler Williams in second place and Hernandez in third. Summerhill continues as the Lap Leader and Hernandez as Best Young Rider.

Andrew Garfield Interview on Being a Good LGBTQ+ Ally

Diet Dilemma: Should You Be Taking Probiotics?

104: Things that have helped my anxiety