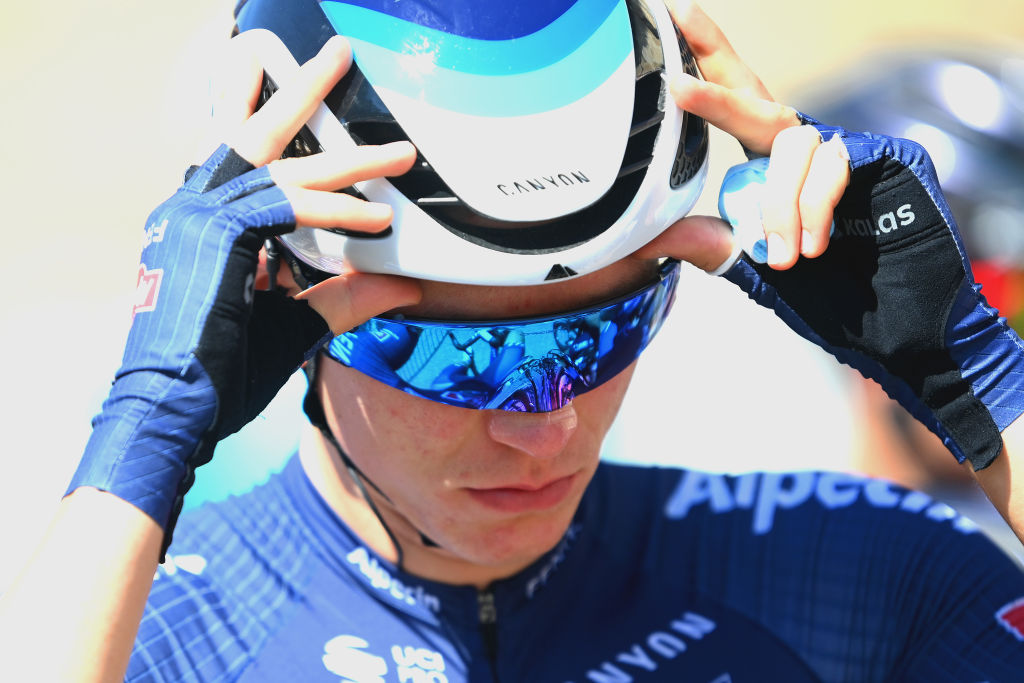 A year ago, after having watched a number of opportunities to take his cycling to the next level evaporate with the growing COVID-19 pandemic, Jay Vine wholeheartedly grasped the one that remained, winning the Zwift Academy and a contract to race with Alpecin-Fenix for a year. That year has now turned into three with the Australian rider, who was quick to deliver results in Europe, securing a contract extension through to the end of 2013.

The 25-year-old Australian, a late comer to road cycling, was quick to make a mark after negotiating the travel complications of a pandemic closed border so he could get to Europe and take up his position with Alpecin-Fenix.

“I’m ecstatic,” said Vine of the contract extension in a team statement. “This year I came in wanting to give it everything I had and to do my absolute best for the team, with the ultimate goal of securing a contract extension with Alpecin-Fenix.”

“I was in uncharted territory racing as a professional, it was all completely new to me. At the start of the year, my wife Bre and I sold everything we owned back in Australia with the intention of turning this into a long-term career, so I’m really thankful and relieved that I’ve been able to secure more years racing with Alpecin-Fenix.”

In his first race with the team, at the Tour of Turkey, Vine not only managed to deliver a second place on stage 5, but also held firm with second overall in the eight-stage 2.Pro tour. His second race, Ruta del Sol, ended in a crash, however on recovery he quickly proved that his Tour of Turkey strength wasn’t a one-off. At the Vuelta a Burgos he came fifth on the tough final stage mountain finish of Lagunas de Neila. Then, he not only earned a spot in the squad for the Vuelta a España, his first Grand Tour and WorldTour level race, but rode strongly in the break on stage 12 and then overcame a crash to take third on stage 14.

“The team has been giving me opportunities and helping me develop as a rider,” said Vine. “I’m so relieved and thankful for the opportunity Alpecin-Fenix and Zwift gave me. Zwift Academy turned my distant daydream back in 2019 into a reality, I’m racing with a team that I didn’t even think I had a chance to race with, I’ve travelled to countries I would never have travelled to, I’ve made great friends along the way, and I’m doing what I love and that’s riding my bike.”

The rider from Canberra, who started out in mountain biking, moved over to the road in earnest in 2019, finishing in the top ten of Australia’s National Road Series and then making it onto the podium of a stage of the UCI 2.1 ranked Herald Sun Tour in Australia at the start of 2020. That was a result which started to raise discussion about his potential to carve out a career in cycling.

Plans to capitalise on the interest generated by that podium finish by racing overseas were stopped in their tracks with the growing COVID-19 pandemic. However, the eligibility of the men’s Zwift Academy competition opened up beyond the under 23 riders in 2020, providing Vine with another pathway.

“I didn’t want to let this opportunity go to waste,” said Vine. “This year has been a huge learning experience for me, and I can’t wait to see where the team and I will go over the next few years.”

5 Foods To Eat On Your Period