Jay Vine just one day away from Tour Down Under victory 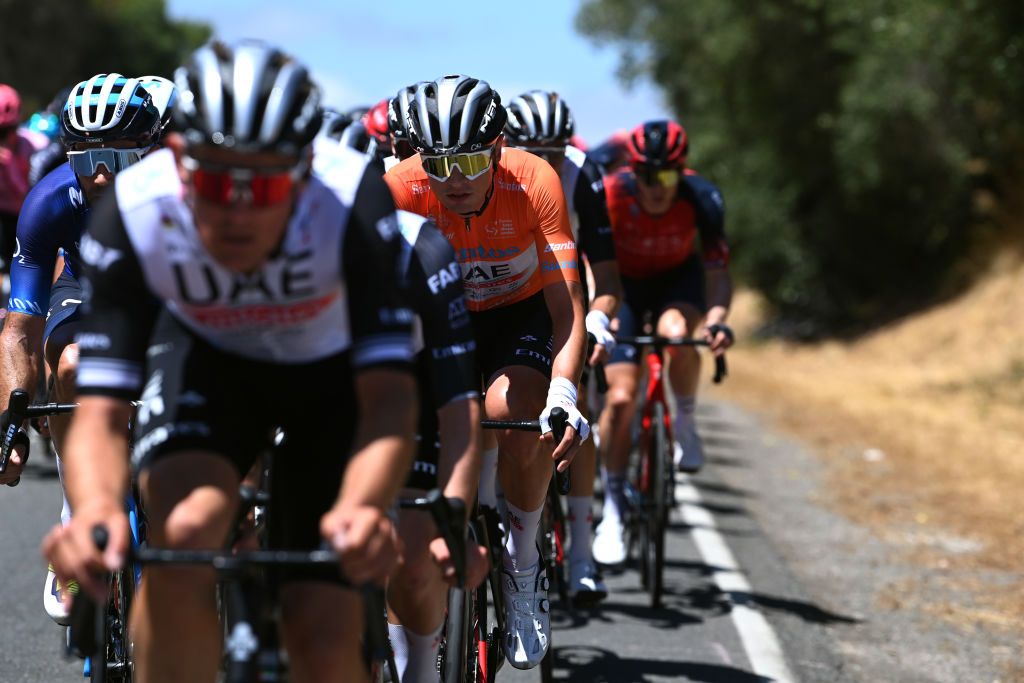 Jay Vine and his UAE Team Emirates squad survived a nervous day in the crosswinds on stage 4 of the Tour Down Under and so is just a day away from overall victory in the Australian World Tour race.

Now the talented young Australia has to control any final attacks during Sunday’s hilly stage to Mount Lofty to seal the overall and make another significant step up in his already prolific and intense career.

Vine took the ochre-coloured leader’s jersey on stage 3 by launching the attack of the day on the twisting Corkscrew Road climb. He was joined by Simon Yates (Jayco-AlUla) and Pello Bilbao (Bahrain Victorious), distancing Rohan Dennis (Jumbo-Visma) and taking control of the podium places.

Vine leads his two rivals by 15 seconds going into Sunday’s final stage and is growing in confidence.

“I’m not counting my chickens before they’re hatched but tomorrow is the day we’ve got the stronger team for the rolling, rouleur type course,” Vine said with composure.

“But I’m not thinking I’ve won until I see the finish line tomorrow. That’s when I’ll be happy.”

“The cool thing about the team is we’re not going after everything, we just have the one goal of trying to focus on GC. The guys know that I’ll work for them next week in the Cadel Evans Great Ocean Road Race.”

27-year-old Vine understands his ability and performance data and believes the Mount Lofty stage and the climb to the finish is not hard enough to put him in difficulty, considering his excellent form

“We got through stage 3 and that was probably the one we were most worried about. It’s still only a three-minute effort all the way to the top on Sunday. It’s very up and down but not super-hard.

“Jayco AlUla will want to secure second overall and there’s a real flight for the minor placings too, so those micro games should also play in our favour.

“The Mount Lofty climb is a 6w/kg effort but not long enough for people to get away. Of course we know that anything can happen.”

Vine’s UAE Team Emirates rode diligently at the head of the peloton during the 133.2km stage around the McLaren Vale wine estates, protecting Vine from the wind, a major split in the peloton and a high-speed finish in Willunga township.

The Australian rode like a veteran and avoided the sprint finish that saw Bryan Coquard (Cofidis) surprise those chasing the stage.

Vine admitted that Saturday’s racing had been stressful. The atmosphere at UAE Team Emirates before the start was tense but they responded well when the race exploded.

“There was one point where I was like ‘oh, we’re going to have an easy day’. I was happy, smiling, waving to some families on the side of the road. Then 45km in, it was just on and it was on until the end,” Vine said.

“It was a pretty hectic day, with the wind direction changing all day. Sometimes I could understand where on the course I was. Fortunately I have an amazing team, I think I had six guys in the front group helping me. It’s very confidence-inspiring.”

Why You Shouldn’t Make Your Child Hug Other People

StockX lays off about 80 more employees