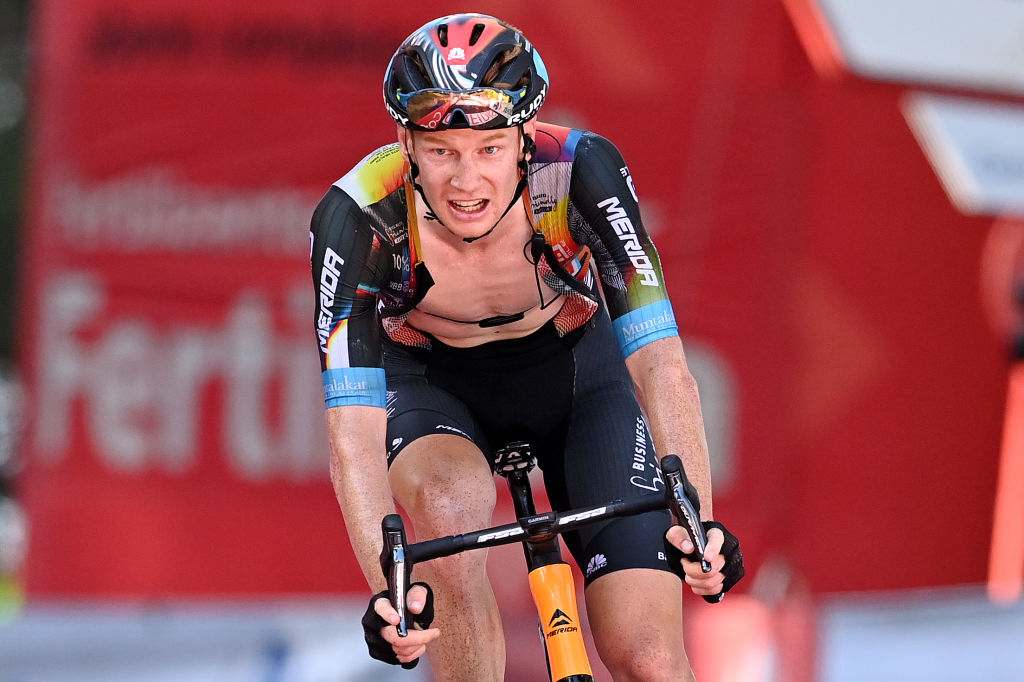 When Jan Tratnik reached the top of the Alto de Velefique, he didn’t quite know what to say. His Bahrain Victorious teammate Damiano Caruso had won stage 9 of the Vuelta a España, his team leader Mikel Landa had lost all hopes of final overall victory, and Jack Haig had climbed to within touching distance of the podium after placing fourth on the day.

With Caruso still detained by the podium ceremonies and with Bahrain Victorious seemingly reluctant to make Haig or Landa available for comment, the reporters corralled in the mixed zone past the finish line opted to flag down Tratnik for some reaction to the team’s day of contrasting fortunes.

Tratnik, who came in 27 minutes down, apologetically indicated that his knowledge of what had transpired on the final climb was limited to what he had managed to make out over his crackling radio earpiece.

“For now, I just know that Damiano won. The other things, I don’t know what happened but for sure it’s a good day for us,” said Tratnik, who spoke cautiously about his team’s revised general classification aspirations. “I don’t know what to say here. I just know Jack will give the best, like the team.”

Landa had already lost a fistful of seconds at Cullera on Thursday and a few seconds more at Balcón de Alicante the following day, and Sunday’s trek through Spaghetti Western terrain completed the trilogy. As Ineos resumed their pace-making at the base of the Alto de Velefique, Landa dropped off the rear of the red jersey group, realising that he was unable to return fire.

The Basque rode towards the summit with Wout Poels and Mark Padun for company, crossing the line 5:04 down on Caruso and just under four minutes down on red jersey Primož Roglič (Jumbo-Visma). In the overall standings, Landa is now 16th overall, 5:47 off Roglič, with three teammates – Haig, Caruso and Gino Mäder – ahead of him.

When Bahrain Victorious directeur sportif Gorazd Štangelj arrived at the mixed zone, he confessed that it had been an afternoon of mixed emotions too, good and bad. “I was enjoying watching Damiano in front and I was suffering watching Mikel,” he winced, explaining that Landa’s travails had not come as a surprise.

“From this morning he complained a bit. He didn’t have the best feelings, so we mentioned to a few guys to watch out for him because he’s still a champion. He’s still one of our best riders and we still want to support him, as we did until the end, when he was dropped with Wout Poels and Mark Padun.”

While Landa dropped down the standings, it was another encouraging afternoon for Haig, who rode with assurance to place 4th on the stage, 1:44 down on Caruso and 39 seconds down on Roglič. His display lifts him to 4th overall, 1:42 behind Roglič and just 21 seconds off the podium.

Haig bided his time as Adam Yates’ forcing saw the red jersey group fragment and reform on the final ascent. After Roglič and Mas forged away near the summit, he then unleashed an acceleration in the chasing group that definitely distanced Egan Bernal (Ineos), who dropped to 5th overall, 1:52 off Roglič.

“Look, it’s difficult to say we expected this, but we hoped for that,” Štangelj said of Haig’s rise in the overall standings. Haig, like Landa, is riding this Vuelta while feeling his way back from a crash that forced an early abandon from his first Grand Tour of the summer, but he appeared among the strongmen on Sunday’s finale.

“This is just the first block of this Vuelta, the hardest days are still coming. Jack showed from the beginning good condition, but we are more looking day by day in front,” said Štangelj, who added that Haig’s late attack had been largely of his own initiative.

“It’s difficult to take these decisions because from the car it’s difficult to know how the guys are feeling, but Jack was in a good position because he had good legs and Damiano was in front. When the other guys were in a battle, he just controlled the situation.

“The final 5km of the climb suited him because it was less steep and he made a good decision to try the legs. Once he saw that Bernal was dropped, he continued. But it was not his goal to drop Bernal; his goal was more to limit the gap to Roglič and Mas in front.”

As the Vuelta breaks for its first rest day in Almería, Haig looks set to take on the role of team leader, just as Caruso did at the Giro when Landa was forced out by his early crash. After the podium ceremonies, Caruso made his way through the mixed zone. The Sicilian, a career gregario, enjoyed a remarkable stint as a leader in May, climbing all the way to second overall in Milan. The philosophy, it seems, is the same as it ever was in this sport: next man up.

“I feel sorry for Mikel, but that’s cycling,” Caruso said. “Now we have Jack Haig in a good place on GC. He’s still riding good and from Tuesday, another race starts.”

Swimming has Helped Eddie Hall Stay Laps Ahead of His Competition