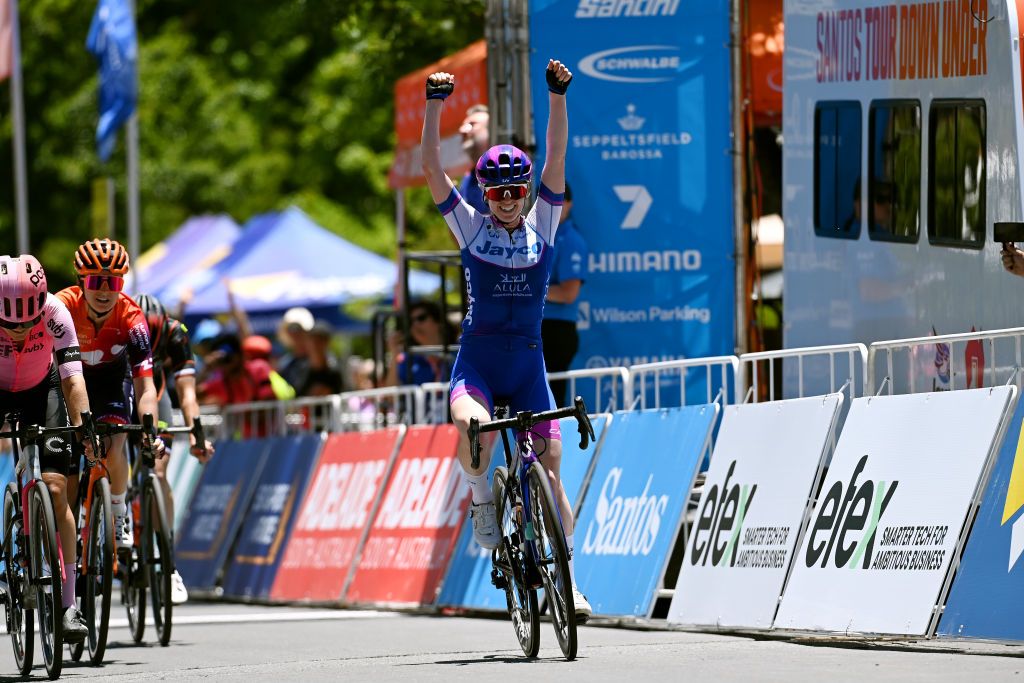 Stage 2 of the Women’s Tour Down Under finally brought the much desired and deserved victory in their home WorldTour race, made even more special as Alex Manly triumphed on her home roads, winning the sprint after a solo move from Amanda Spratt (Trek-Segafredo) was brought back only 500 metres from the line.

“It was a hard stage all day, a couple of things were happening, and in the final, I just gambled a little bit. Luckily, it all came back together,” the stage winner and new overall leader said after celebrating with her Jayco-AlUla teammates.

“It was super special; I had a lot of my friends and my parents out on the finish line. That was really nice.”

Teammate Ruby Roseman-Gannon played a key role in Manly’s victory, attacking from the chasing just before the flamme rouge to go after Spratt and making Grace Brown (FDJ-Suez) chase her in turn.

“If Ruby got away there, I would have been stoked to see her win, but it did force Brown to chase, and then I was able to follow the wheel. Ruby and I had talked about this, we knew that would draw her out, so as long as one of us was on the wheel to cover it, then we would have the perfect lead out into the finish,” Manly said, explaining how the team tactics worked out.

“To finish it off with the girls, I was so stoked. Also because my best friend Georgia Williams got second, once I knew it was her, I was like, ‘yes’, that made me even happier,” Manly said.

Going into the third and final stage of the Women’s Tour Down Under in the ochre jersey, Manly has an eight-second lead on Brown and Williams, with Roseman-Gannon fourth at 13 seconds and Spratt fifth.

Manly and Roseman-Gannon will work together to defend the overall lead, both riders having free rein to fight for victory.

“I think that the numbers will play to our advantage. Trek will try to put us under pressure, for sure, but we will try to keep the jersey,” Manly said.

“Ruby and I are very similar riders, so we know that we’re always going to be there to back each other up. She’ll be right there with me tomorrow, and if she gets over the hill before me, it’s no stress because she can sit on, and I know she can win against the climbers.

“We’re pretty happy to be in this position, and we’ll just give it a go.”

Impress people with your strengths, connect with your weaknesses