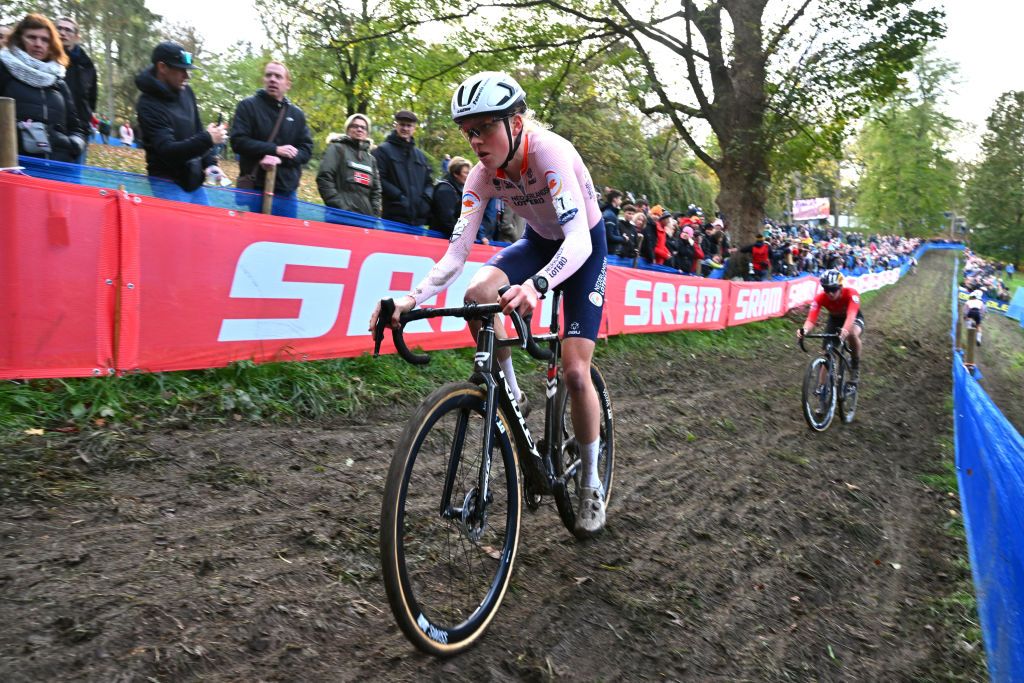 The 20-year-old said she had her eye next on the cyclocross world title before switching her attention to the Spring Classics with Jumbo-Visma in 2023, where she will learn from new road teammate Marianne Vos.

“I have a small break [after cyclocross], then maybe some mountain biking and road racing,” van Empel said.

The 20-year-old Dutch rider will join Jumbo-Visma’s Women’s WorldTeam in January on a two-year contract, the team announced in September. She is looking to test her strength and skill in races like Strade Bianche and Tour of Flanders.

The youngster is proving to be a considerable talent, winning her first elite title after she elected to ride in the elite women’s category at the Cyco-cross European Championships instead of the under-23 category.

Disaster hit the Dutch favourite on the second lap when she punctured while passing the pit, resulting in her running backwards down the course to change bikes, losing 28 seconds to the leaders.

Despite the early problem, Van Empel kept calm, clawing her way to the front and then attacking on the penultimate lap for the victory.

Ceylin del Carmen Alvarado was helpless against the attack of her fellow Dutch rider and was distanced in second, while Blanka Kata Vas (Hungary) finished third.

It was Van Empel’s eighth victory of the cyclocross season and the first title in the elite category at the European Championships.

“I can’t believe it, at the moment, it’s a bit weird,” said van Empel talking about her dominant form this year that has seen her win World Cups at Waterloo, Fayetteville, Tabor and Maasmechelen.

“I worked hard for it, and hard work pays off. I never expected that I would catch up after my flat tyre, but every lap, I could catch up.

“I believed in myself, and that was enough to win. Halfway in the pit, I knew my front wheel had a flat tyre, so I turned back, and luckily, I got a new bike, so I caught up.

“I was strong, and my legs were good, so that was enough.

“I’m always calm, so that was crucial for the race. It would not be so good if I had some panic, so the only way was to stay calm.”

The Dutch woman leads the cyclocross World Cup standings and is now the European Champion. She plans to ride every weekend until the World Championships in February before switching to the road season.

However, she will miss some races, only riding one day each weekend, while her rivals sometimes ride two.

Van Empel has aspirations of riding the women’s Spring Classics alongside her soon-to-be teammate and cyclocross World Champion Marianne Vos, and some mountain bike races.

“I think I race every weekend one race and then some training in the week, which is enough to recover well and prepare me for the upcoming race,” she added.

“I have a small break, then maybe some mountain biking and road racing.”

When asked which road races she would like to compete in, Van Empel replied, “Strade Bianche, Tour of Flanders, those kinds of races. I don’t know if I’m good at those races.

“I don’t know, but first, I will focus on cyclocross, and then we can talk with my new team.”

Old Hollywood Actresses Who Were Infamous for Sleeping Around

7 Ideas for Making your Next Company Event Green