Fabio Jakobsen: The green jersey is the goal at the Vuelta a España 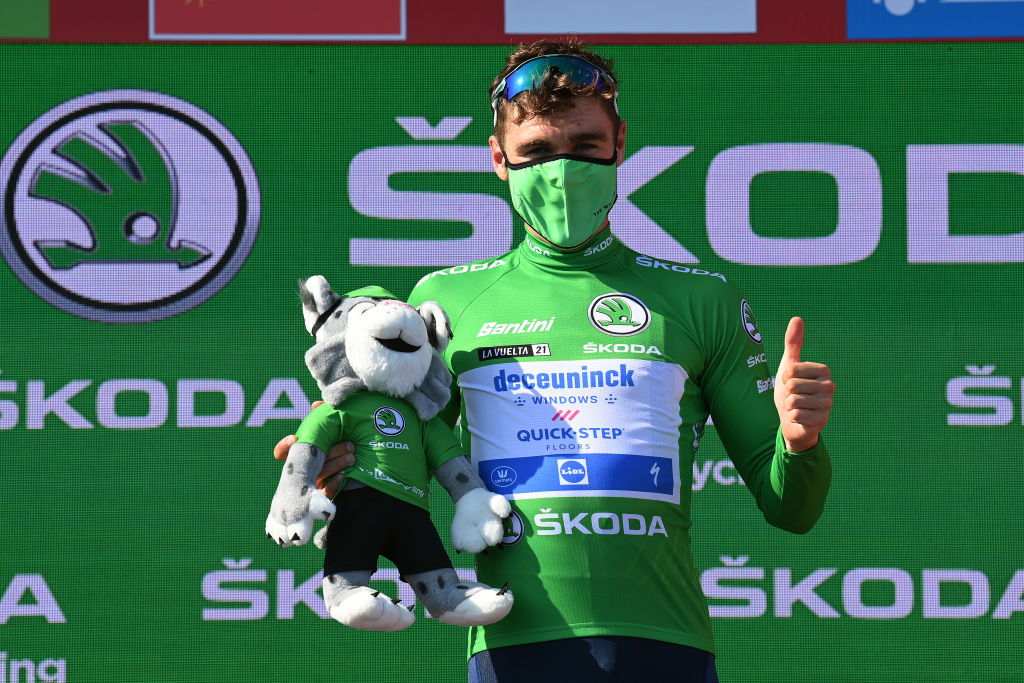 After three stage wins in the 2021 Vuelta a España, Fabio Jakobsen (Deceuninck-QuickStep) confirmed that his final goal in the race will be to wear the green jersey all the way to the finish in Santiago de Compostela in five days’ time.

Jakobsen has more than fulfilled his pre-race mission in the Vuelta a España with his hat-trick of stages, while Deceuninck-QuickStep picked up a fourth with Fabian Sénéchal on the one day the Dutchman could not make it to the sprint.

While there are no more sprint stages on offer between here and Santiago de Compostela, Jakobsen holds a considerable advantage in the points competition. At the moment Jakobsen has 250 points, 127 more than his closest rival Jasper Philipsen (Alpecin-Fenix)

However, he recognised that the final stages, starting with two days in the mountains of Asturias, would not be straightforward.

“I have to get over those mountains,” he told reporters after claiming his fifth career victory in the Vuelta a España during stage 16 on Tuesday.

“But my teammates will stay with me, and if I stay healthy and on my bike, the green jersey is a reachable goal.

“I have to make it to Santiago, and if there is the chance of some points on the way, of course, I will go for them, that would be great.”

In any case, as he pointed out, after three stages wins, “everything from hereon is a bonus. But I would like to finish the Vuelta and hopefully in green.”

Looking back at his latest win, Jakobsen agreed that it had been an extremely technical finale, “or as Primož Roglič [Jumbo-Visma] likes to say a ‘gran casino’” – a chaotic finish.

Jakobsen listed off the challenges he had faced in the last part alone: “6.5 kilometres there was a roundabout to the right, another three kilometres go, then in the final corner, somebody almost crashed and I was just behind.”

On top of that, Jakobsen pointed out that UAE Team Emirates had made a successful effort to drop him on an unclassified climb 50 kilometres from the line. Fortunately for the Dutchman, he had had some sterling support from his teammates getting back into contention.

“This is not my victory, especially today,” Jakobsen said by way of demonstrating how big a contribution his teammates had made.

“I got dropped but my teammates kept me in front. Then even though it was a gran casino, they could launch me perfectly. It’s my birthday today, but I’m happy to give them this victory as a gift to them all as well.”

The Vuelta a España has been singularly special for Jakobsen this year, with his first week win in particular representing the closing chapter of his comeback from the terrible injuries of 2020.

But he said, either way, that he still gets goosebumps with each win, because “it’s so nice to be able to sprint again.”

“I know it’s dangerous, but there’s the adrenalin and focus that comes with it, too. And to get a win on my 25th birthday in a Grand Tour like this, that’s a dream for every young boy or girl as a sprinter.

“Last year, I went back and forth to hospital, and I had no idea if I could become a bike rider again. These wins are better performances than when I won here two years ago,” before adding a simple heartfelt conclusion, “I love the Vuelta.”

Meditation Made Easy: Tips for the Busy Mom

Cody Miller Reveals Baby No. 2 On The Way For Olympian and Wife, Ali