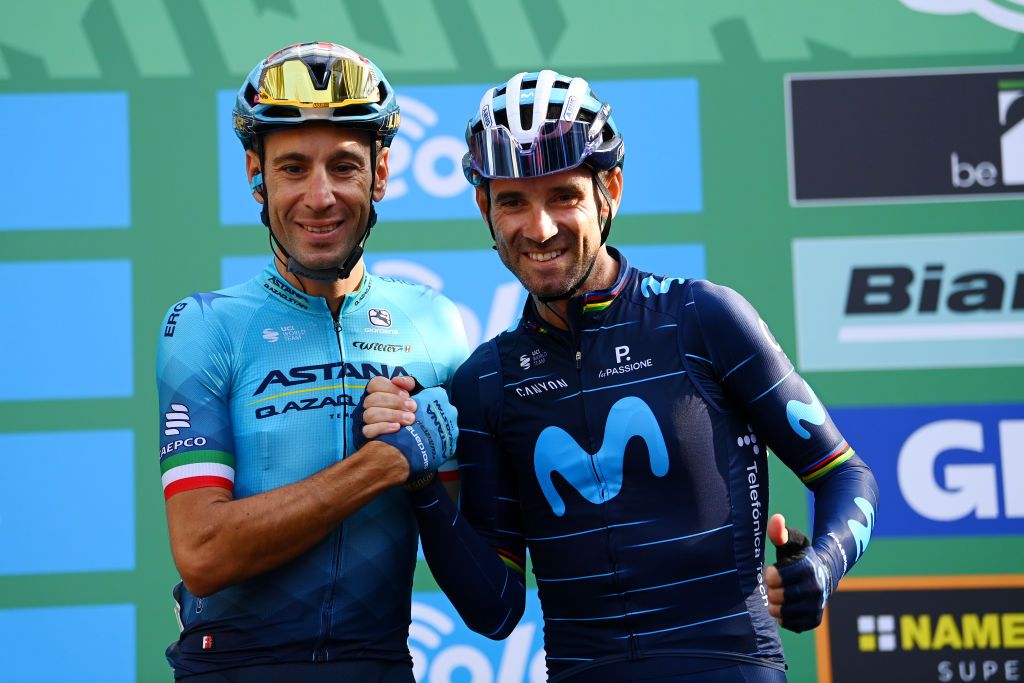 Vincenzo Nibali and Alejandro Valverde lined up together for the start of Il Lombardia and their careers ended together on the shores of Lake Como, six hours later, ending an era in the sport and their long and distinguished careers.

Tadej Pogacar (UAE Team Emirates) and Enric Mas (Movistar) showed a younger generation now rules the sport but this year’s Il Lombardia was a farewell as well as the final monument of the race.

Both Nibali and Valverde tried to fight for one last victory and a perfect goodbye. However, a surge from UAE Team Emirates distanced Nibali on the Civiglio climb with 20km to go and he came in a distant 24th place at 2:17. Valverde finished sixth, bringing home a group of chasers at 1:24.

Nibali received the most cheers throughout the day, the tifosi packing the roadside for a last glimpse of ‘Lo Squalo di Messina’. His family were also at the finish and witnessed first-hand the affection in Italy for one of the greatest Italian riders of all time.

Nibali tried to hold his composure; there were no tears of sadness or joy, but he was clearly emotional.

“I’ll miss it all but there’s no going back, I’m done,” Nibali said before joining his wife, daughter, and his parents and family that travelled to Como from Sicily for his farewell.

Nibali and Valverde were the last to sign on in Bergamo, the Sicilian stopping numerous times for selfies and autographs, especially with a young boy who was in tears to see him in his last race.

The two then rode through the middle of the peloton to line up on the front. Along the whole route, there were signs and cheers for Nibali.

“I enjoyed every kilometre, from the start in Bergamo to the finish in Como,” Nibali explained. “Today was a special day, it was emotional to see all the fans along the roadside.”

Il Lombardia was Nibali’s farewell ride but he still wanted to race.

“It was a fast, hard race, even more so than other editions I’ve raced. I suffered on the Civiglio climb and paid for it. I couldn’t do it much more and so I’ve no regrets.”

Nibali told Cyclingnews in a special farewell interview that he is already working on his post-career plans. He will play a key ambassador role for the new team being constructed by former Dimension Data manager Doug Ryder and the owners of the q36.5 clothing brand.

He may have raced as a professional for the last time but cycling will remain part of his life.

“I’m a former rider from tomorrow but the bike will always be part of my life. I won’t ride on Sunday but I’m sure I’ll go for a spin as an ex-pro pretty soon. I’m looking forward to the rest of my life, not back.”

No victory for Movistar in Valverde’s final raceValverde

Valverde raised a hand as sprinted to finish sixth at Il Lombardia, a wave of thanks and a sign-off, more than a celebration. Beyond the finish line, Enric Mas gave him a long emotional hug and spoke privately into his ear.

The two had perhaps hoped to win on a special day for the Movistar team, with Mas admitting that his second place did not cancel the sadness he felt for the end of Valverde’s career.

Valverde was far happier, despite ending his career. In 2022, he will have a still-to-be-defined management role in the Movistar team, sharing his experience and determination so often seen during the ‘Least expected day’ documentary series on Netflix.

“I am happy to have completed 21 years as a professional and to have enjoyed great things,” he said, with a smile and pride.

“Now I have to give way to younger people, hoping that they also enjoy making this sport great.

“I am excited about the future. There’s sadness for leaving with this great level and happiness for the enormous work that the team has done today all day and being able to fight for the win.

“Thanks to all my teammates and congratulations to Pogacar and Enric Mas, who achieved a great second place and was very, very good again. We raced hard today, ‘a tope’ – full gas. That’s a good way to go out.”