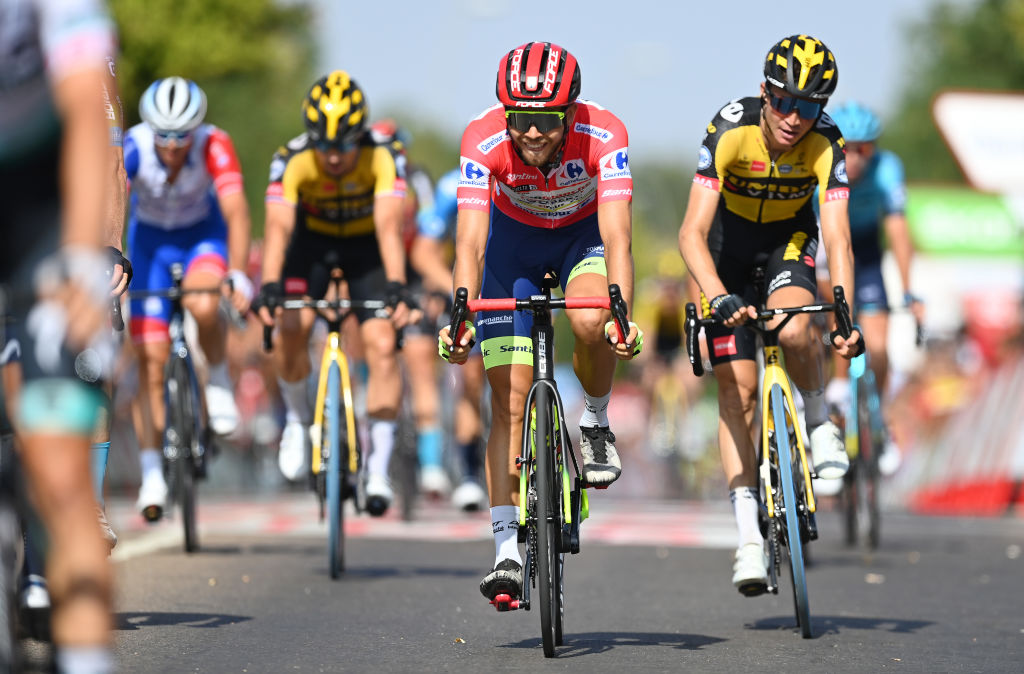 Odd Christian Eiking’s spell in the Vuelta a España’s leaders jersey ended in pain and disappointment after Egan Bernal (Ineos Grenadiers) and Primož Roglič (Jumbo-Visma) attacked with 60km to go and distanced him before he crashed on the descent as he fought to defend a place in the top five overall.

Eiking fought back after the first climb of the La Collada Llomena but was distanced on the second time up it with 60km to go as Ineos Grenadiers rode to set up Bernal for his attack. He went over the summit a significant 1:50 back on Roglič and Bernal but was closer to the chase group of other GC contenders.

Eiking tried to pull back time on the rain-soaked descent but after Aleksandr Vlasov (Astana-Premier Tech) and others crashed at speed, he slid out, too. He got up and continued to chase but had no chance of catching the group led by Bahrain Victorious and gradually lost more time.

“It was the worst possible scenario: with the legs and with the crash, I suffered too early,” Eiking said post-stage.

“I was hoping to limit my losses by coming back on the descent, which I thought we were doing. But then the crash happened and it was not possible to come back anymore.

“I knew I was not on a great day but I was hoping to be in the group with some of the favourites when we started the last climb. Then I’d probably only lose a few minutes and not whatever I lost.”

Despite losing the leader’s jersey, Eiking promised to race on, remembering the positive aspects of his week as the Vuelta a España race leader.

“It’s been a really nice week, probably the best race of my life,” he said. “I’ll take that with me and there’s still  a few stages left. I’ll keep on racing.”

Postpartum Yoga Poses You Can Practice With Your Baby

5 Ways To Ace A Store Refresh Of Your Retail Merchandising