Egan Bernal: Anything can happen at the Vuelta a España – but you need the legs 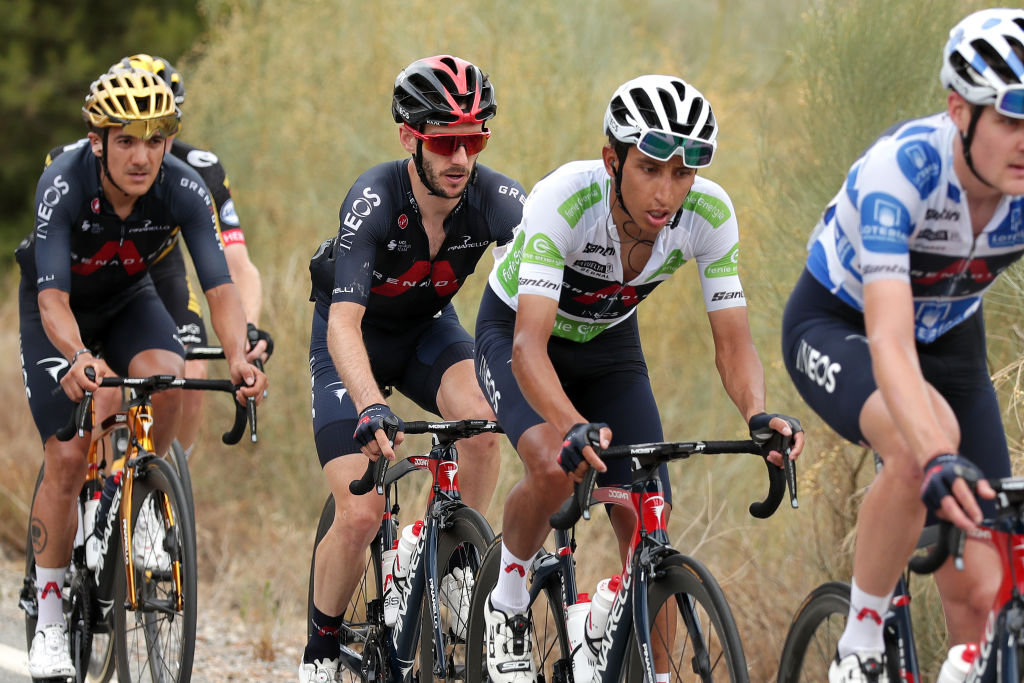 In the Movistar press conference on Monday morning, Miguel Ángel López evoked the possibility of a comeback from Egan Bernal (Ineos Grenadiers) in the final week of the Vuelta a España, but the man himself was more circumspect about the prospect of a remontada when he met the press in the early afternoon.

Bernal lies seventh overall as the race approaches its denouement, 4:21 behind red jersey Odd Christian Eiking (Intermarché-Wanty-Gobert Matériaux) and 2:45 down on favourite Primož Roglič (Jumbo-Visma), while his Ineos teammate Adam Yates sits in eighth place, a further 13 seconds back.

The road ahead offers scope for significant changes in the overall classification, with consecutive summit finishes at Lagos de Covadonga and the Alto d’El Gamoniteiru to come on Wednesday and Thursday.

To this point, however, neither Bernal nor Yates have looked like troubling Roglič in the high mountains, with the Movistar pairing of López and Enric Mas currently appearing the more obvious obstacles to a third straight overall win.

“I think it’s been OK. I mean, we are not in the best position, for sure, but it’s not bad either,” Bernal said on Monday. “We are, I think, seventh and eighth on GC, and we’re feeling ok, so we still have some possibilities if we have the legs for the next week. I think anything can happen for sure.

Bernal added that both he and Yates would fight a common cause in the final week. “With Adam, we’ve got a very good relationship,” he said. “We’re both willing to sacrifice our own chances for the other if that’s needed.”

Since the Vuelta left Burgos two weeks ago, Bernal has repeatedly stressed that he has been short of his best, due in part to his diagnosis with COVID-19 just a week after claiming overall victory at the Giro d’Italia.

Although he managed to limit his losses to Roglič in the opening phase of the race, Bernal was unable to cope with the changes of rhythm on the Alto de Velefique on stage 9, and he conceded more time to the Slovenian at both Rincón de la Victoria and Valdepeñas de Jaén in week two.

“I think that at this moment, I’m in the situation I thought I’d be in after having COVID-19 and not having the best preparation for the Vuelta,” Bernal said. “The first stages were complicated but I’m still up there after some difficult days and I’ll keep trying.”

Prior to winning the Giro, Bernal had expressed concern about the nagging back injury that had forced him to abandon last year’s Tour de France, though the complaint did not appear to impede him unduly in Italy. On Monday, Bernal noted that his back injury had not been a significant factor in his Vuelta thus far.

“It’s obviously much better than it was at the Tour last year. I felt it a bit at the Giro, but I have to say it’s much better,” he said. “It can hurt me at times still, but the pain in the legs is worse than the pain the back. I need to keep improving and I’ll keep working on it over the winter.”

Bernal was also asked to cast his mind forward to 2022, when he will be expected to go head-to-head with Tadej Pogačar (UAE Team Emirates) at the Tour de France, even if the Colombian pointed out that his participation in La Grande Boucle wasn’t a certainty at this early juncture.

“It would be interesting to race against him, but there are three Grand Tours every year, and it’s not only the Tour de France,” Bernal said. “This year, I did the Giro and the Vuelta. Next year, it will depend also on the routes of the Grand Tours.”

Yates and the final week

Since the start of this Vuelta, Bernal expressed hope that he might hit his stride in the demanding final week, though he admitted that he was unfamiliar with the mountain stages to come in Asturias.

“I haven’t raced much in Spain, so I don’t know them, but I know they’re hard climbs, where you can make a difference if you have the legs,” said Bernal.

On the road to the Alto de Velefique, Ineos raced as though their leaders had the legs to take on Roglič, though both Bernal and Yates would lose ground when the Slovenian accelerated viciously in the finale.

Now down to six riders following the abandons of Richard Carapaz and Jhonatan Narváez, it remained to be seen if Ineos will race in the same manner in the final week.

“It all depends on the situation, it depends on what happens. At the end of the day, we’re a little bit further back on GC than some of the other teams, so why is it on us to really force the race?” said Yates.

“It always seems that when we put our necks on the line, people take advantage so we’ll see what happens and we’ll take it from there.

“It depends on the race situation – not just on us but on the riders around us. It’s a hard one to answer. At the moment, every time we’ve felt good, we’ve tried to do something. Maybe it’s not worked out so far but there’s a lot more racing still to come and a lot of climbs that should suit us down to the ground. So let’s see if we have the legs and take it from there.”

Oakley Re:SubZero Are the New Heroes of Sunglasses

What To Do When You Don’t Like To Sell