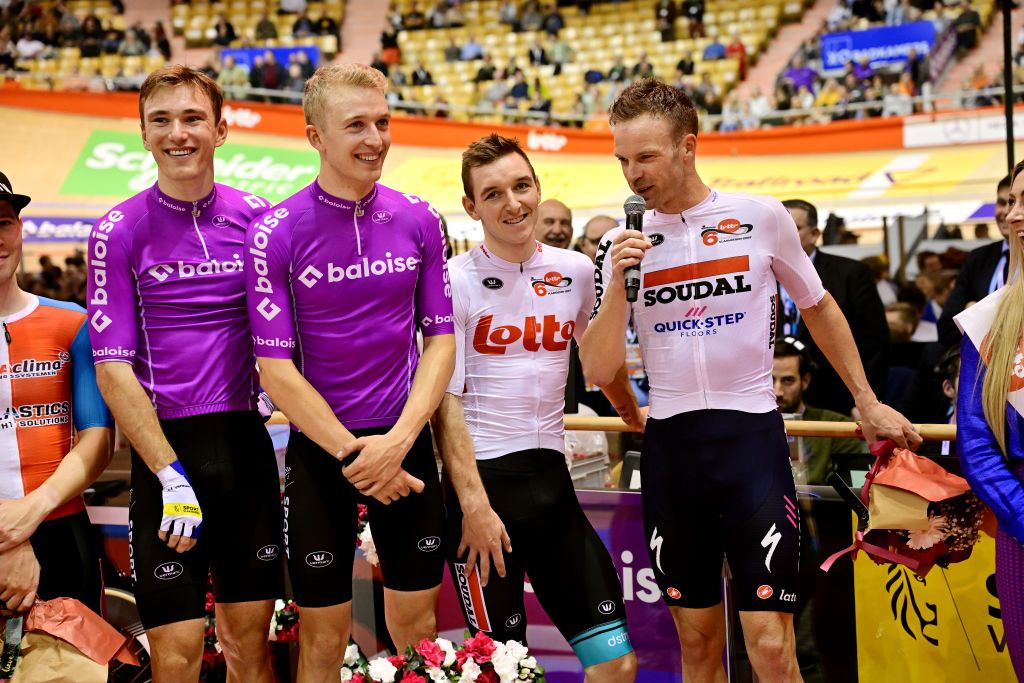 Lindsay De Vylder and Robbe Ghys secured the overall title at Lotto Gent Six Day on Sunday, using a victory in the Madison to seal the deal. The Belgian duo overcame a one-lap deficit to Yoeri Havik (Netherlands) and Fabio van den Bossche (Belgium) from Saturday.

The home crowd was soundly rewarded on the final event of the evening – the men’s Madison. It marked the final time veteran star Iljo Keisse (Belgium) would race on the track in a career spanning three decades. Along with countryman Jasper De Buyst, he finished in third overall.

Throughout the week the crowd in the Belgian city’s ‘t Kuipke velodrome cheered wildly for Keisse and De Buyst, supporting a final appearance in competition for the 39-year-old Keisse. He announced earlier in the year he would retire and this outing at Gent Six would be his 18th and final.

“I don’t know where to start… Everything began here. I was dreaming of riding the Six Days as a little kid, while sitting here and watching the riders from the stands,” Keisse said in a team statement after the event. “I came a long way, and then, in 2005 I won it for the first time. That was a dream that came true, a really magnificent moment.

“Since then, everything came faster and faster, and I enjoyed every single moment of winning Six Day races. I got so much from the amazing public and, at the same time, I tried to give back a lot. It was an unbelievable journey and I am grateful for everything.”

The six days came down to the final Madison to decide the podium. The two top teams were in the same lap and separated five points but two other teams were within reach – the Belgian pairing of Keisse and De Buyst and the Belgian/German duo of Jules Hesters and Torn Teutenberg.

De Vylder and Ghys held on to a lead the built earlier in the day and came away with 356 total points. The Belgian-Dutch second-placed duo, who began the multi-day event last Tuesday with a win in the final sprint of the Madison, scored 337 points. Keisse and De Buyst worked their way to third overall.

Nicknamed ‘the King of ‘t Kuipke’, Keisse had 28 individual victories and seven overall titles in six-day races headed to the final round on Sunday. He not only won his final individual race, the Derny, but with partner De Buyst, also lapped the field in the Madison, the velodrome erupting with applause, and put the duo back on lap count with the leaders to secure a spot on the overall podium.

“I’m proud to have been able to experience part of Iljo’s career and that I was able to hurt him myself, that is also a small honor. I hope that I will also come close to his seven victories,” Ghys told Sporza after winning his third title in a row.

“I have a great schedule for 2023, starting tomorrow I will start with my new team (Alpecin-Deceuninck), I hope that my bike will only get bigger in the future.”

It was the 100th anniversary of Gent Six Day, held on the 166.67m velodrome in the Belgian city. Ceremonies on the first day included two-time winner Bradley Wiggins firing the starting pistol to kick off the event.