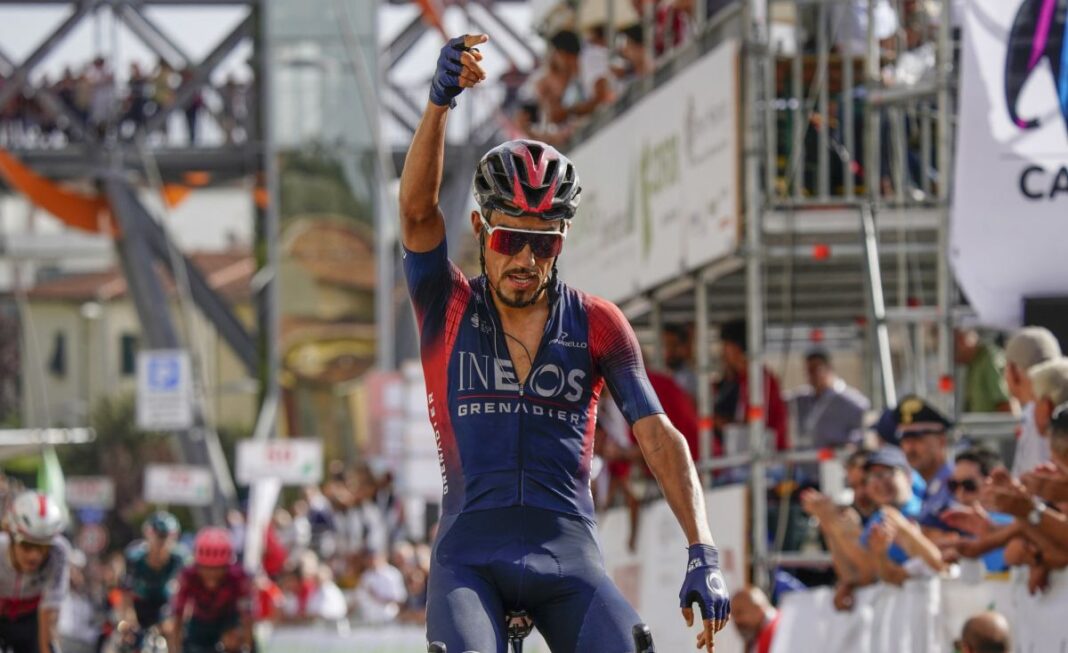 Dani Martínez (Ineos Grenadiers) emerged victorious at the Coppa Sabatini, sprinting  to the line from a select five-man group.

The Colombian had sparked a successful counter-attack on the day’s final climb to bring back long-range attacker Aleksandr Vlasov, before getting the better of the resulting group in the final sprint.

Odd Christian Eiking (EF Education-EasyPost) attempted to get on terms but had to settle for second, while Guillaume Martin (Cofidis), who launched two late attacks, rounded out the podium.

Eiking’s teammate Esteban Chaves placed fourth in what was a decent haul of UCI points for the relegation-threatened team, while Vlasov was spent and trailed home in fifth.

Vincenzo Albanese (Eolo-Kometa) led home a chasing six-man group, who had formed the first key selection of 11 before being cut adrift on the final climbs.

“I live nearby and know the roads very well, and I’m very happy to win here,” said Martínez.

“When Vlasov attacked, I knew it was very dangerous. I waited and gave it everything on the final climb. In the end there were five of us, and I managed to win.”

The 70th edition of the late-season Italian one-day race covered 198.9km on punchy circuits around Peccioli, with six helpings of the Muro di Peccioli and Montefoscoli climbs before a 12km finishing loop that featured a kilometre-long climb.

After the day’s breakaway was caught with nearly 100km remaining, the race entered a chaotic phase, with multiple attacks and strong riders threatening to go up the road.

Vlasov sprung a surprise by attacking early on the first of the two finishing laps with 20km to go, carving out a lead of 30 seconds. However, Martínez leapt into action on the climb to the second of three passages of the finish line, drawing out Eiking before Chaves, and Martin bridged across.

The quartet caught Vlasov with 6km to go, before making their way to the final climb and the short section of flat to the line. Martin looked to launch a couple of early accelerations but Martínez moved up past Vlasov to take the fastest inside line through the final left-hand bend with 125 metres to go.

From there, he made no mistake, holding off Eiking to erase Wednesday’s disappointment after he himself had a solo bid ended before missing out in the five-man sprint at the Giro della Toscana.