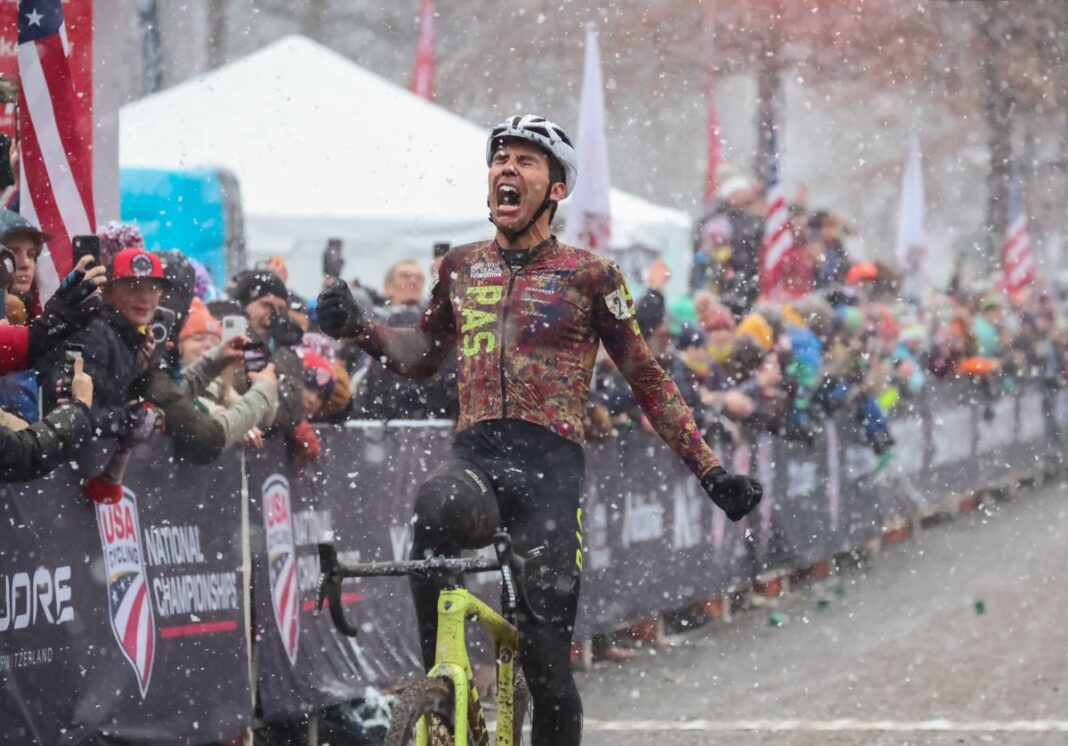 Curtis White (Steve Tilford Foundation Racing) stormed across a snow-covered course in Hartford, Connecticut to claim his first stars-and-stripes jersey at the US Cyclocross National Championships. He took a hard-fought victory in the elite men’s race against Eric Brunner (Blue Competition Cycles p/b Build), who settled for the silver medal.

It was an emotional win for the 27-year-old White, who had pursued a cyclocross national title for 17 years and finished second seven times across various divisions.

“Chasing the stars-and-stripes, my peers haven’t made it easy on me and I thank them for that. You know, day after day my family, my fiancée, my friends are sacrificing. It’s freezing (today)! All the sacrifices have paid off. National champion, finally,” White said through a few tears at the finish. “I wanted that stars-and-stripes so bad. It is something I thought about every day.”

It was like a home win for White, who grew up in western New York state and lives in nearby Massachusetts. This season he was second to Brunner at the Pan-Am Championships, but took top honours ahead of Brunner for the overall title at the US Cyclocross Series. The last three rides at CX Nationals left him in the runner-up position in the elite field, last year behind Brunner.

“Eric [Brunner] has really upped his game the last few years, he’s a fierce competitor. This race I knew what he was going to do, I knew what he was capable of. He’s done a lot of work on the technical side. When he got a gap with three or four [laps] to go, I knew anything could happen. So I rode  my own race, tried to perfect things that I could have done better,” White said.

“What won the race for me was taking a risk on the decent off-camber. I don’t know if I was the only one riding it, but I saw my chance to gain momentum. When I caught him [on lap six], I don’t know if he saw it. I put all my eggs in that basket.”

Funston, last year’s U23 men’s champion, took the holeshot. As the field wound through the opening s-turns by the pits, Haidet rode at the front with White in tow and the attrition was taking place as the field headed to the first set of stairs and ensuing off-cambers and run-ups.

Riders encountered slippery tracks on the 2.2-mile course at Riverside Park as heavy snow began to stick to frozen mud. In the woods Haidet led a long line of single-file contenders, with Brunner and White taking bike changes and holding the L39ION rider’s wheel. Through the boathouse on the Connecticut River and onto the second half of the opening lap, Funston held on to fourth just in front of Brannon Fix (Fix Racing) in fifth.

On the second lap, Haidet had a rough exchange in the pits and slipped a few spots down the line. Brunner and White were riding in tandem at the front of the field, having smooth transitions to take clean bikes. Funston chased in third position, but began to fall off the pace as Haidet held fourth and Swartz fifth.

The thick snowflakes continued to blow across the course while the highly-anticipated battle between Brunner and White settled in. By the time the pair completed a third lap, Brunner had hit the accelerator on the pavement and opened a gap of six seconds ahead of White. Funston then made inroads to close down his five-second gap to White.

The chase continued for White with three laps to go, Brunner holding a 15-second advantage. Funston trailed in third with Werner holding him in his sights to a chance to podium alive. Another 20 seconds later, Swartz and Haidet joined forces in the pursuit.

On the penultimate lap, White caught Brunner on a long run-up after Brunner crashed in a snowy section. It came down to last-lap opportunities for passing and staying upright on the slippery slopes. The New York-native then took the lead over the Colorado rider in the white Pan-American jersey with a significant move in the long, power section in the woods. He opened a solid four seconds over Brunner that held to the finish.

Of the 42 riders at the start line, only 13 riders finished on the same lap as the top pair.