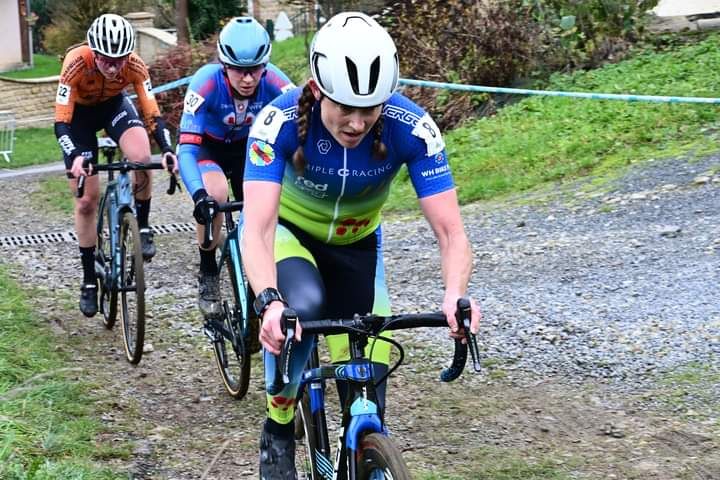 It would be a miss if I failed to give “Urban Cross” huge props for being one of the most fun, most memorable races on the calendar. Kortrijk is a small city in West Flanders, quite close to France. The course is, as promised, truly urban. We race within the city on the banks of the Leie river, including crossing it twice via car and pedestrian bridges. The course has a mix of everything: long, fast pavement stretches, sand, twisty bits with greasy mud, and lots of curbs.

Despite my love of Kortrijk, Saturday might have been better had I never left the safety of my bed. Bad luck was my bestie all day.

There are times when the challenges of my life racing here extend well beyond racing a bike.

On Saturday morning, due to a last-minute scheduling challenge, I suddenly found myself piloting my mechanic’s van to Kortrijk to meet the other mechanics on site. Yeah, it’s just driving a car, right? Sure, all except its massive girth, width, 6 speeds, and the tank of water in the back that affects acceleration, braking, and turning!

I made it to sign-in safely, which wasn’t a given with the very large vehicle, small European city streets, and me at the helm!

However, it turns out that getting into Kortrijk wasn’t the hardest part.

At inscription, I passed the “sleutel” (key) to one of my mechanics and became a passenger for the next leg of our challenge. With the pass marked “Elite” on our dashboard, we pulled into elite parking. The entry guard clarified “profs” (meaning “professioneel/professional”) and we consented and pulled into parking, which was approximately half empty.

We knew our luck was about to turn when we saw my “favorite,” parking guard making haste towards us. Despite the obvious vacancies, he declared that there were no more spaces. From what I gathered via my preschool-level Dutch fluency, “vrouwen” (women, aka, elite but not “profs”) were now to proceed to an overflow lot. The directions were simple: “rechts, rechts, rechts” (right, right, right).

We followed the directions and landed at the television parking lot, which was blocked by a pay-for-entry gate. Confusion and negotiations with further parking guards ensued. During this time, two other female, foreign riders and support staff arrived and joined in the fun. After being firmly denied free parking, our parade of vehicles drove northwest around the course. After many more rechts, we eventually found a volunteer who bent the rules and let us park.

We lost 35 minutes to this “avontuur” (adventure), but we did get the last laugh. Our unofficial parking was near the start and nearer to the pit than the “real prof” parking. The best bonus was our closeness to porta potties set up for television staff. That’s right. We had our “own” clean bathrooms that didn’t require bumping elbows with drunken fans!

Does it make sense now? How sometimes it’s hard for foreigners, especially women, just to get to the start line.

But back to the race itself. Did I mention how I should not have gotten out of bed?

I had two mechanicals in the first 1.5 laps, including a very long, very slow trip to the pit. In these races, the competition is so fierce that there is zero room for error. There’s no coming back from a lengthy pit visit.

Sometimes the takeaway from a day is, “At least I can drive a big truck!”

For the record, I also piloted the truck home without incident.

Sometimes you just have to get out of Dodge…or Belgium.

Belgium can sometimes make you feel like Sisyphus, endlessly trying to shove the boulder uphill. See Saturday (above) as exhibit A.

There are smaller C1 and C2 UCI races all over the continent for most of the winter. France, Spain, and Switzerland all have a solid calendar, and you can go even further afield to the Czech Republic and Slovenia. The Belgians and Dutch who are trying to “make it” pack up their campers and travel to these races.

Think about it. Imagine you are trying to come up through the ranks here in the cyclocross motherland. North Americans, Brits, Swiss, Czechs: we can all develop at home before venturing to Belgium. For Belgian and Dutch riders, the pathway is “B-races” at home and then travel abroad to gain experience and the valuable UCI points to move up the grid.

With the young trio of Pieterse, Van Empel, and Van Anrooij riding rip-roaring fast laps at the front, it’s getting harder and harder to “stay in” the Belgian races. For me, going “abroad” gives me challenging races where I am likely to finish on the lead lap, but where the competition remains intense.

Accordingly, I went to France on Sunday to race a C2 and truly enjoyed myself!

Racing in Belgium lacks novelty for me at this point. I know the courses. I know where we (are supposed to be able to) park. Belgium for me is about racing the bike and performance. I’m not over the racing. I love the intensity of seeking my own level of mastery. However, I have long since lost the excitement of seeing a cute little Flanderian street. I don’t draw energy from that anymore.

France was the opposite. Everything about that scene was novel and engaging.

A little corner of La Grandville was closed down for the cross. The course had significant vertical, as it was a grassy, wet cow pasture on the side of a hill overlooking the village. They had a little concession stand. (Can we say French crepes?) Essentially, the race was tiny and communal and charming. Yes, I have raced in the “greatest crosses in the world” and this was the opposite in every way.

I chatted with Maghalie Rochette at the start. She is naturally very at home in France, but has also found the pleasures of doing some of the races “further abroad.” We agreed it’s a different scene and place and sometimes that’s oh-so-refreshing. It’s fun also to see how a different country does cross.

As far as the race, it was a good one for me. I took the joy of the day and extended it in my riding.

But let’s not talk racing, let’s instead leave you with a visual. In the morning, I arrived at the venue just as the bread delivery was being made. A woman drove out and unloaded four huge sacks of the most delightful-looking baguettes for the concessions.

Yes, I am all about bike racing, but sometimes some racing goes best in a place that’s new and different and where one can end the day with a hot crepe and coffee. Merci France!

Demetrious Johnson Used “Zombie Training” To Get Back To Life

Back and Shoulders 💪 #shorts #workouts