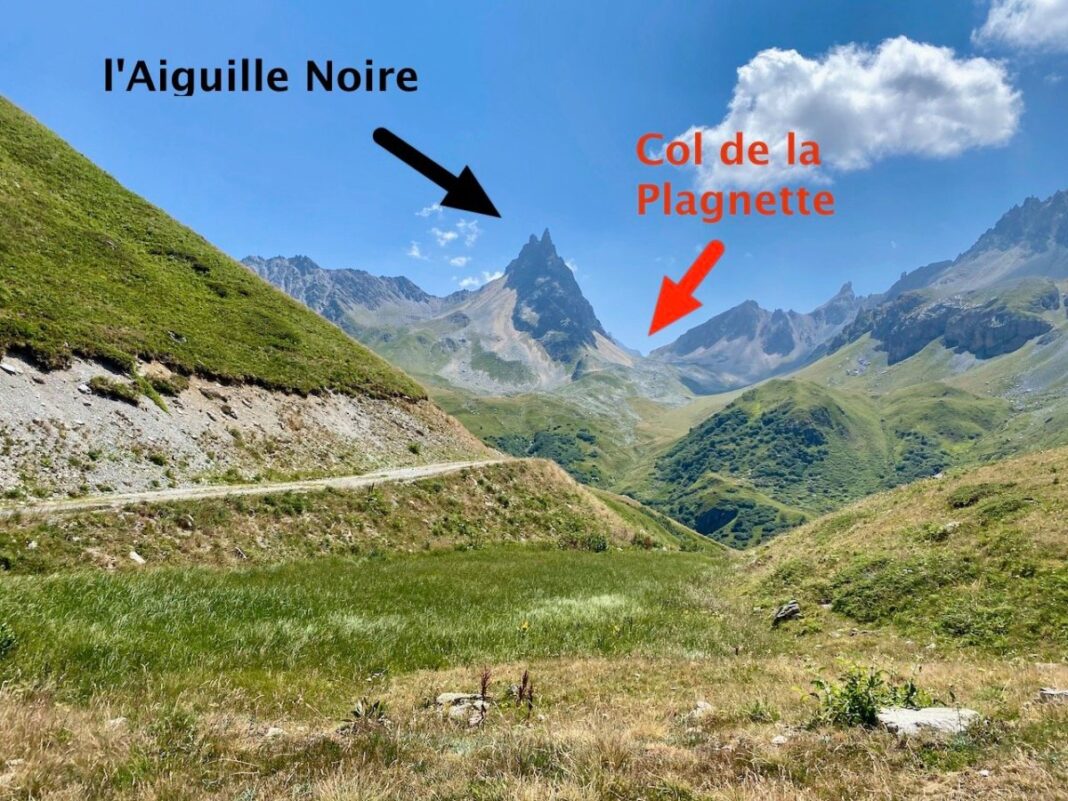 This ride includes two gravel adventures. First climbing from Valloire to the top of its Ski Station (2534 metres) via at least 35 hairpins. Then some superb gravel up a truly beautiful hidden valley parallel to the paved Galibier road but surrounded by high mountains, and then a slightly crazy ascent to Col de la Plagnette – bike pushing involved. Woohoooo !

My wife and I were staying in Valloire for three nights. Our plan was to do several big hikes and I was allowed one (one!) bike ride. So I chose it carefully. In fact, I used our first hike to do some serious route planning:

But my first goal was to get to the very top of Valloire-Galibier ski station. Starting from town, if you look closely at the map you’ll see it is nothing but hairpins early on. It is paved for a couple of kilometres and I passed various ski chalets, but it soon becomes a nice gravel ski-lift service road.

I reached the top of one of the main chair lifts and there was a nice lake.

But it was still a long way to the high point at the top of another lift. The final couple of kms were steep and I passed some hiking school children so slowly that we could have a nice chat and they kindly cheered me on. But I made it! Nice views and a fancy top-of-the-resort sign.

Next I descended down another gravel service road to try and join up with the route I had hiked with Doreen the previous day. I am going to post the photo again, but while hiking I had been so transfixed with L’Aiguille Noir. I have visited Col de la Plagnette from a different direction before on a mountain bike, but wondered if it was possible from this side.

And now I was on my bike heading directly at this beautiful peak.

I knew the gravel road would soon end and things would get trickier. But two friendly and very fit guys in French National jerseys (ski or VTT or XC ski champions?) coming from other way said it was difficult but not dangerous. So I got on the trail.

Some parts were relatively easy and some parts brutal, but I made progress. Note, the final 3 kms to the col were mainly bike pushing/carrying.

But I was thrilled and relieved to reach Col de la Plagnette (2525m):

Over the top I soon arrived at 2 alpine lakes that are sadly fairly dry/empty. It was a short ride to Col des Rochilles (2496m) – which I know – and a long, bumpy descent to Plan Lachat on the Galibier north side.

See this old ride for details of climbing Col des Rochilles from Plan Lachat and continuing east past these lakes all the way to Briançon: Col Hunting Behind Le Grand Galibier

This old photo below shows the beautiful Col des Rochilles descent. It was taken on paved road at 6km marker below Galibier summit, but the gravel road is clear on the left. Many hairpins! Anyway it is fun when a silly idea is successful.

Here’s a 3D video of this great route:

Hollywood Celebrities Who Are Unrecognizable In 2021 | Marathon

5 Pilates exercises for a strong core