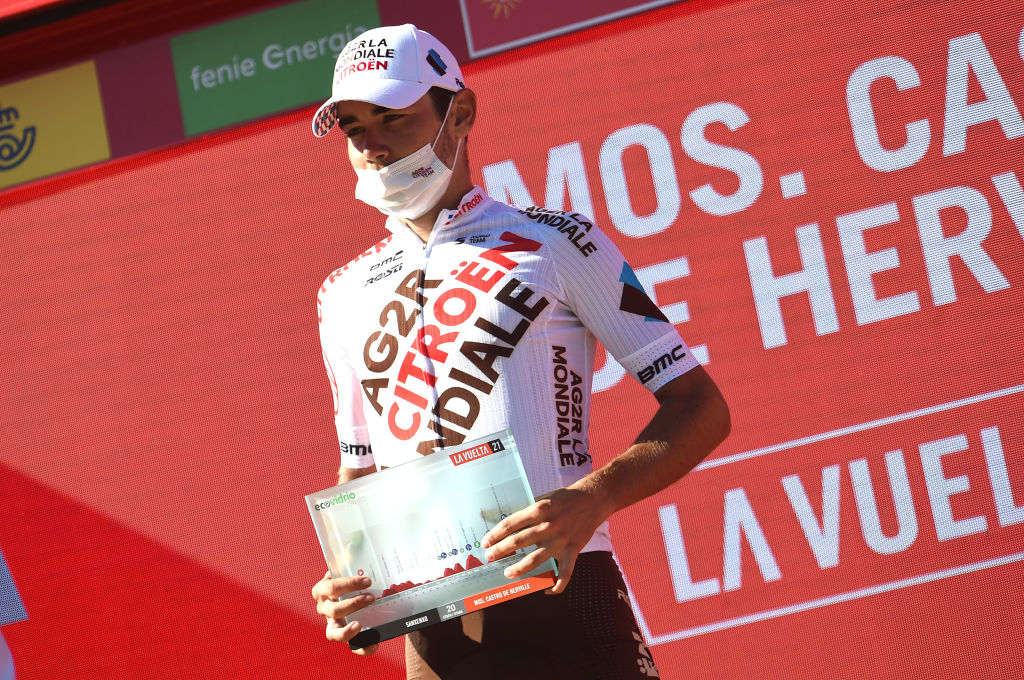 After the last breakaway rider standing, Ryan Gibbons, was caught on Saturday’s final climb of stage 20 of the Vuelta a España, the final kilometres looked all set to be a showdown for victory between the big GC names of Primož Roglič, Enric Mas, Jack Haig and Adam Yates.

However, rather than one of the GC protagonists enjoying a crowning moment on the Alto Castro de Herville, it was another name from the breakaway who enjoyed victory on the final road stage of the race – AG2R Citroën’s second-year pro Clément Champoussin.

The Frenchman looked long gone after the chase groups behind Gibbons merged at the bottom of the final climb, but the 23-year-old emerged almost out of nowhere with two kilometres to go, bursting past Roglič on the fan-packed climb with a gurn of pain etched across his face.

Following the brave but ultimately fruitless attacks by fellow comeback kid, Euskaltel-Euskadi’s Mikel Bizkarra, on the climb, Champoussin looked set to end up another victim of Roglič’s fearsome sprint.

However, he persevered and powered away, suddenly gaining 15 seconds and enjoying enough time to celebrate as he crossed the line alone.

Champoussin said afterwards that he took advantage of some good fortune to make his way back to the front on the final climb, and then grasped his opportunity when there was a lull in the action among the GC riders.

“To be honest, when we got caught at the bottom of the climbing, after being the whole day ahead, it was a bit tough, but the favourites were tired too I think,” he said.

“When they went in the steep part, it was going too fast for me. Afterwards, I was lucky, I ran into Gino Mäder, who brought us back into the group. I hung on, clocked up, and a little over a mile from the finish I was lucky they looked at each other. Since I’m not dangerous, I thought to myself that I had to try to pass a little faster.”

Champoussin, who had been in what was originally a 24-man breakaway since the opening 30 kilometres of the 202-kilometre stage, said that the result was “a bit unexpected” after the race he’s had, which has including a spell of illness he suffered earlier this week.

“The last kilometre wasn’t too hard, and I was able to stay ahead until the end,” he said. “It’s a bit unexpected because I’ve had some ups and downs over these three weeks. Yesterday I was really not well.

“Today I would have been happy to finish the stage. I was with Lilian Calmejane and Stan Dewulf up front. They helped me a lot all day. I couldn’t miss.”

Having finished his debut Grand Tour – last year’s Vuelta – in 31st place, Champoussin is now set to finish safely in the top 20 this year. He lies 16th overall, 52:05 down on Roglič, ahead of Sunday’s closing time trial.

Dry Fresh Herbs Now to Enjoy All Fall and Winter

Tom Pidcock: In the Cross Fire