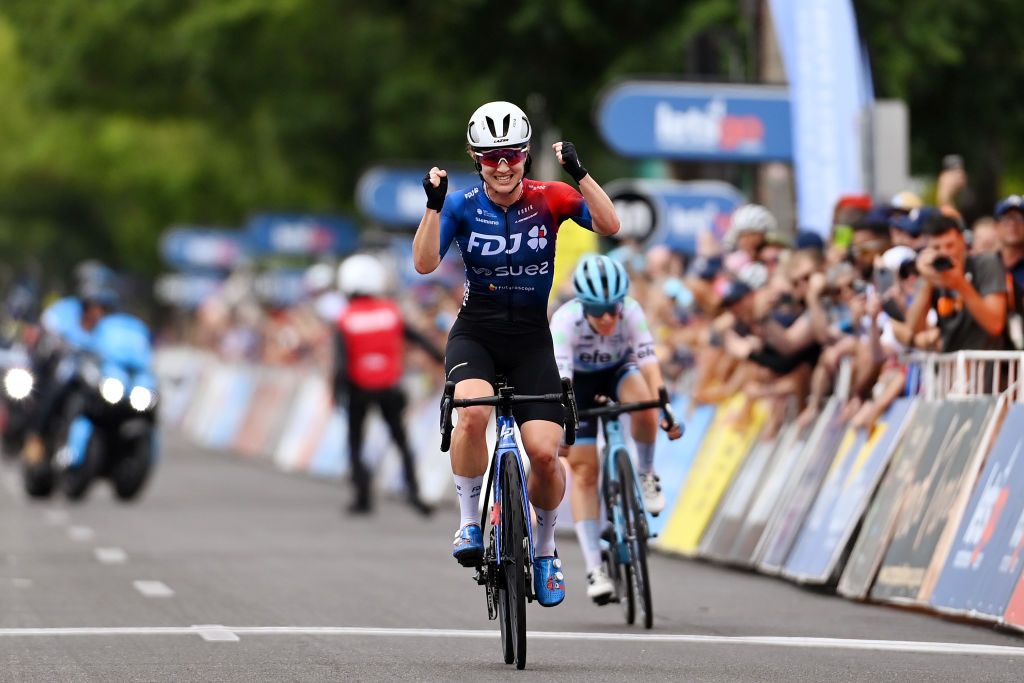 Grace Brown (FDJ-SUEZ) has won the women’s Santos Tour Down Under, taking the ochre jersey by scooping up victory in the final stage. Brown did her best to stay close to Amanda Spratt (Trek-Segafredo) when the latter attacked on the steep Corkscrew climb, and although Spratt was 20 seconds ahead at the QOM, Brown used the descent expertly to reduce her deficit.

“I had to keep pushing on the descent, there was no freewheeling, that’s for sure. I actually put a bigger chainring on this morning knowing that this might be a scenario,” she said of her chase.

Brown came back to Spratt at the flamme rouge before outsprinting her for the stage and GC victory as well as the points jersey and Women’s WorldTour leaders jersey. Spratt finished runner-up on the stage and in the GC and won the mountain jersey, Georgia Williams (EF-TIBCO-SVB) won the group sprint for third place and also rounded out the overall podium.

“I’m really pleased. The team did an awesome job today, they led me out into the final climb. I knew that Amanda was going to be really good on the Corkscrew, but I just kept her within distance knowing that I could potentially catch her back on the descent, and I was able to do it. Really cool to take this victory after some awesome work from my team,” Brown said after her first women’s Tour Down Under victory.

In hindsight, picking up five bonus seconds in intermediate sprints on stages 1 and 2 made the difference as Brown was sure of winning overall when she caught Spratt. Brown explained that she didn’t want a repeat of the 2022 Women’s Tour: “Having been in a similar situation last year where I lost the GC by one second in the final stage, I wanted to be on the front foot this week,” she finished.

Stage 3 started in the outskirts of Adelaide before heading east into the Adelaide Hills and finishing in Campbelltown after 93.2 km, with the Corkscrew climb the main difficulty of the day, cresting 7.5 km from the finish line.

Gina Ricardo (Team BridgeLane) and Georgia Danford (Team Coop-Hitec Products) formed the early breakaway, and Lucinda Stewart (ARA Skip Capital) bridged to the front duo after the first intermediate sprint to make it a break of three. Their advantage maxed out at 2:35 minutes with 26 km to go before Trek-Segafredo and Jayco-AlUla, with the overnight leader Alex Manly, took up the chase in earnest.

Danford lost contact on a small climb, then Stewart slipped on the gravel in a downhill turn and crashed, leaving Ricardo alone at the front. She soldiered on until she was caught with 15.5 km to go but won the combativity award for her efforts.

Closing in on the Corkscrew Road, Trek-Segafredo increased the pace with Lauretta Hanson, and Brodie Chapman pushed hard once the race reached the climb to set up Spratt’s attack. The 35-year-old climber attacked 1.5 km from the top and quickly opened a gap on the rest of the favourites, with only Brown staying close to her. On the final part of the climb, Spratt increased her gap on Brown, who was 20 seconds behind at the top with the next group a further 15 seconds down.

Brown threw herself into the descent and gradually made up ground, finally catching Spratt as they entered the final kilometre. Due to her six-second advantage ahead of the stage, Brown was now certain of winning the general classification, but she went one better and also outsprinted Spratt for the stage win. It was 13 seconds later when Williams led home a group of eight riders that included her teammate Krista Doebel-Hickok, winning EF-TIBCO-SVB the team classification. Also part of that group were Henrietta Christie (Human Powered Health) and Ella Wyllie (New Zealand) who fought for the U23 jersey; both finished the race in the same time, but Christie edged out her compatriot based on stage placing countback.

World Indoor Best for Hodgkinson – Weekend Round Up