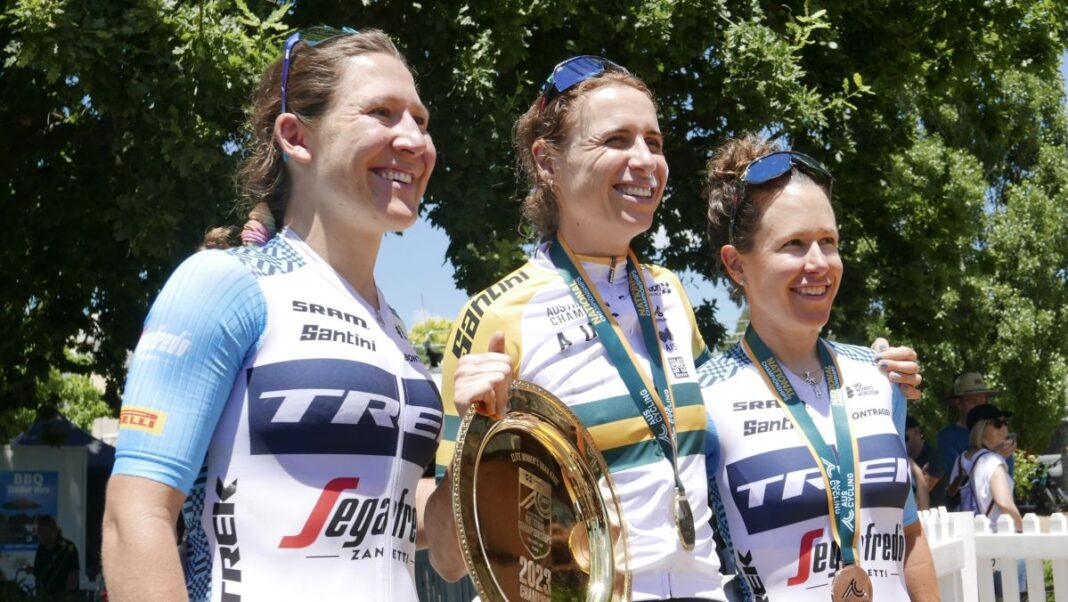 Brodie Chapman came down the finishing straight solo to claim the elite women’s road race title at the AusCycling National Championships on Sunday, claiming the green and gold striped jersey for 2023 in her first race with new team Trek Segafredo.

It was another second place for Grace Brown (FDJ-SUEZ-Futuroscope) who won the charge from the chase group of eight, while Chapman’s new teammate Amanda Spratt rounded out the podium, with her recently honed sprint enough to hold off Ruby Roseman-Gannon (Jayco AlUla) at the end of the 104.4km race.

A big group of riders shot off the front halfway through the race, quickly dropping the number in contention to little more than 20. All of the riders from Trek-Segafredo – Spratt, Chapman and Lauretta Hanson – were present and played their part to perfection as the rest of the race unfolded.

“Definitely putting on a new kit and having a new team gives you that extra little bit of motivation, also having been away from the Australian summer of cycling for the last few seasons, I want to make it count when I come back to visit,” a beaming Chapman told reporters after the race.

And that is just what she did in the very first race of her summer season, launching near the start of the final lap, holding off the chase on the Mount Buninyong climb and then stretching the gap through the descent and technical section through Federation University to finish 31 seconds ahead of her nearest rival.

“It was really the last 500m that I let myself believe it because it ain’t over till it’s over … in the last 500m I was like ‘oh yeah, nobody’s catching me now’ – they’d have to be really good,” she added with a chuckle.

Ella Simpson (Knights of Suburbia) won the U23 women’s title, after coming in on the tail end of the chase group of eight to take ninth.

The combined elite women’s and U23 women’s race for the national title played out on a 11.6km circuit. As the riders lined up on the start/finish line in Buninyong, a small town near Ballarat, at 9:20am the heat was starting to build, with temperatures near 30°C by the time the race finished just over three hours later.

Defending champion Nicole Frain was not on the start line, but the 2021 winner Sarah Roy (Canyon-SRAM) and 2020 victor Amanda Spratt (Trek-Segafredo) were. Both had taken the green and gold stripes while racing for the Australia’s only Women’s WorldTour squad but this year were lining up as rivals to the seven strong Jayco AlUla squad.

Through the first three laps it was all together, but with Grace Brown (FDJ-SUEZ-Futuroscope) – riding without any teammates –  and Ruby Roseman-Gannon looking attentive near the front as the climb was about to begin it was clear the action would soon begin. The field stretched and split on the climb but came back together this time.

On lap five Amber Pate  (Jayco-AlUla) was on the attack, with Matilda Raynolds straight on it, wearing all black kit even in the heat as a clear statement of her ongoing search for a team. That move was swept up but next it was Danielle De Francesco (ZAAF) on the move, pulling away three riders and then the big teams and riders responded, as it was clear the race on switch had been flicked.

All three Trek-Segafredo riders – Amanda Spratt, Lauretta Hanson and Brodie Chapman – made the front group, along with Brown, Ruby Roseman-Gannon was among the Jayco AlUla riders, and then there was 2021 winner Sarah Roy (Canyon-SRAM), Raynolds and 2015 winner Peta Mullens (Roxsolt Liv SRAM) all among that group of around 20 riders.

Brown quickly opened up the throttle on the climb, trying to shrink the group and shed the sprinters. It worked – more than half were dropped.

Beyond the top and Lizzie Stannard (ZAAF) went on the attack, with Spratt covering the move and then she was happy to work with the rider at the front. In the meantime, some of the riders who were shed on the climb regrouped and rejoined the chase group so there was more fire power to chase Stannard and Spratt, who were hauled back in.

Then it was Georgie Howe (Jayco AlUla)  and Hanson who pulled away, their teammates on the front sitting up and giving them the opportunity to quickly pull out the gap with the gap around a minute when the three laps to go sign was held up.

When the peloton hit the climb next time around Brown – who had been on the podium at the race the past three years – pushed the pace again and the gap slowly began to shrink, dropping to 49 seconds by the time the duo hit the Buninyong start/finish line and headed out for the final two laps.

This was the lap Hanson and Howe were reeled back in. Still, once it was all back together it didn’t stay that way for long, with Georgia Baker (Jayco AlUla) launching as they came down the straight with the bell ringing for the final lap.

It turned out that had been just the move Chapman had been waiting for, responding and quickly hauling Baker back in, but that wasn’t her signal to slow down.

The new Trek Segafredo rider pushed on, as the plan had always been to go early on the first lap as the road started heading up on the Midland Highway. Chapman held firm as the road turned onto the official climb of Mount Buninyong Road and made it through to the top with a gap still intact, her teammate Spratt waiting in the wings in the chase group just in case others launched or if Chapman was caught.

At the top of the final climb the fireworks were on within the chase group. Stannard attacked again and then it was Roseman-Gannon, with Spratt quickly jumping on her wheel. Once that was shut down Brown took her opportunity with Roseman-Gannon and Spratt in pursuit, and a chase group ultimately formed.

Even with the pursuit behind, Chapman was still holding out the front as the race headed toward the Federation University section of the course, technical and perfectly suited to the skill set of the one time downhill mountain biker. The spectators on the finish line could soon see a lone figure approaching, with a clear view behind and Chapman swept toward the line with plenty of time to celebrate and enjoy the final meters of a race which would leave her wearing the jersey of a a national champion for the rest of the  year.

Brown then led the chase of eight over the line, with Spratt meaning that even with only three riders entered in race Trek-Segafredo took two of the podium places. Simpson held onto the tail of that group through the line to take ninth and the U23 title as her nearest rival in the U23 competition, Mia Hayden (Team BridgeLane), more than a minute further back.