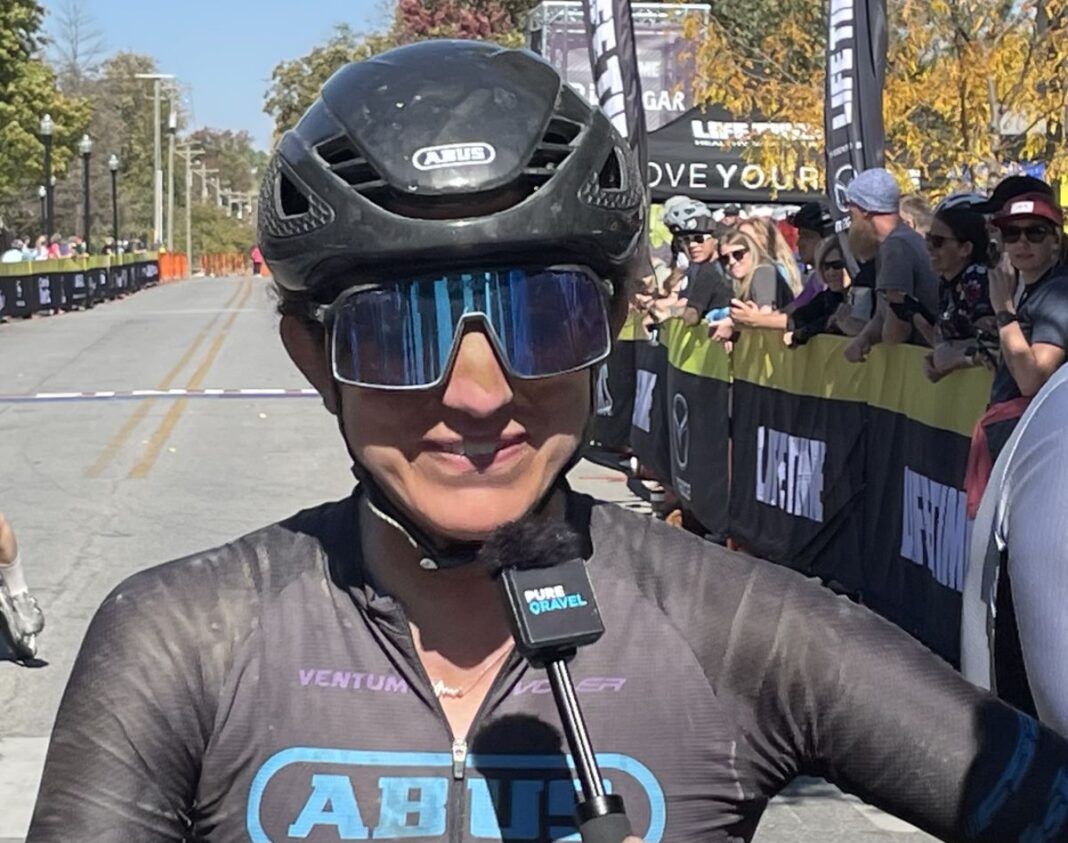 The women’s pro victory at the 2022 Big Sugar Gravel turned out to be quite a jackpot for Paige Onweller. Along with a signature win over a stellar pro field, the Michigan rider gained name recognition and a big, fat payday in the LifeTime Grand Prix presented by Mazda.

The victory at Big Sugar moved Onweller from 12th to ninth in the six-race series, which translated from zero dollars to $7,000.

“Today was twofold. My main goal was to be top three today in Big Sugar. I knew I had to race well in order to get into the top 10 [of the series], which is definitely the goal,” Onweller told Cyclingnews while she proudly toted her oversized check.

Her new foray into cycling began only two years ago. Over the winter she was selected into the field of 30 pro women for the inaugural Grand Prix off-road series that culminated in Bentonville, Arkansas on Saturday.

Only the top 10 received a share of the $250,000 prize purse, split equally with the pro men. She soloed to victory across the 104-mile course, beating the likes of  Emily Newsom, Alexis Skarda, Rose Grant and Lauren De Crescenzo.

“I am very new to this sport. Last year in August at Gravel Worlds was my first mass-start bike race. I was a runner previous to this. So yeah, I don’t think I was on any radar, to be honest. Like even the media car that was next to us, I could hear them talking and saying ‘who is that?’, so I just kind of chuckled and I was like, yeah, no one knows my name. And that’s OK. I think they will now.”

Her time as a runner was plagued with injuries, so she turned to the bicycle to sustain her competitive drive. The 32-year-old admitted that she has dedicated herself to studying and learning about the sport and the equipment, especially “just trying to learn how to ride my bike”.

She got her first taste of racing a bike last year via esports with the Twenty24 development team, and then a one-off entry for the individual time trial at USA Cycling Pro Road Nationals.

“I had a coach’s exception to ride USA Pro Road Nationals last year in the TT, and it was the first race like ‘real life race’ that I had done because I did eSports on Zwift. I just kind of didn’t do as well. I had raw power. I just didn’t really have any skill.”

So to develop these skills, Onweller hired her own coach. She also videotaped herself riding the bike and spent countless hours studying techniques, like cornering. She also dedicated a full month to learn how to fix a flat and change a tyre, even timing herself like a stock car pit crew.

“I knew that raw power was not enough to compete at the highest level, I needed to have some of those other skills,” she said. “I literally set up a camera, I would go to a corner and I would spend two hours and I would just corner it. I would use different tire pressures and different body positions. I just became a student of the sport and tried to learn as fast as I could. That’s how I learned.”

Onweller is a multi-tasker and perfectionist, admitting “I’m just a really competitive person. I like to win and I like to be good.” She has an off-the-bike career as a physician’s assistant in a hospital emergency room, which she admits is “very stressful and a lot of weird hours”. She has added a coaching business, that allows for flexibility in her schedule. She took up cycling in part to avoid the injuries from running, but injuries are still part of the game.

“I had surgery in the middle of my season this year as I crashed with a crosswind back in April. I had embedded gravel in my knee and they had to go and do a surgical agreement. So I had a month off the bike before Unbound this year. Yeah, so that’s why today is extra special because I’ve had a lot of setbacks this season,” she explained.

She started the Grand Prix series with 18th place at Sea Otter Classic Fuego 80K MTB, her first mountain bike race. Then she was a DNF at Unbound, before returning to Crusher in the Tushar and finished 16th. In the final trio of series events, she had top 10s in each, including the win in the finale.

“I knew I had a rough start to this series. I wanted to have a result that I knew I was capable of all season,” she told Cyclingnews.

“You know the saying like, what do you want to be when you grow up? I feel like I’m still processing that, and so next year I will have a partial road calendar and then I will also race gravel and some mountain bike, because I will just do a little bit everything.”

She has concluded her time on the Abus team after Big Sugar Gravel, and said she will join a women’s pro road cycling team, but is not ready to make an official announcement at this time.

“I will just be on a road team. Just a partial, very limited road schedule like Redlands, Gila, Pro Road Nationals. I have some revenge on the TT that I am coming for in 2023, so look out.”

Yang style Tai Chi: The needle in the cotton

Jonas Vingegaard: The Tour de France is hard, anything can happen