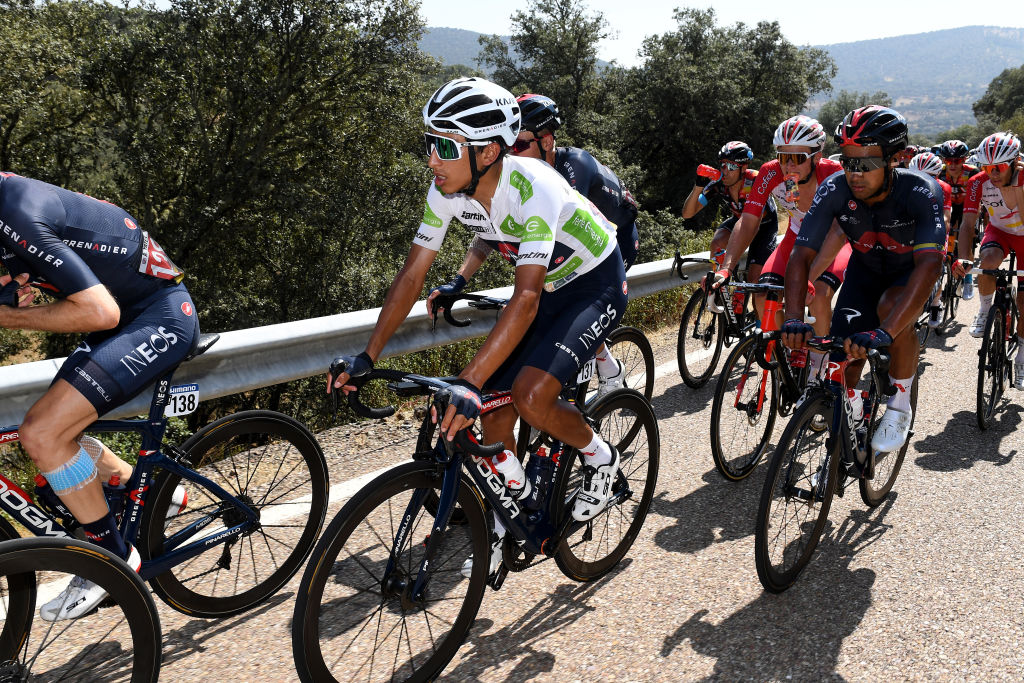 After a sluggish start, Egan Bernal (Ineos Grenadiers) may not have turned a corner  in the Vuelta a España but the Colombian nonetheless put in a solid performance on the Pico Villuercas summit finish on stage 14.

Together with Roglic, Enric Mas (Movistar) and Jack Haig (Bahrain Victorious) Bernal was among the group that lost four seconds on his compatriot López.

What mattered more was how easily Bernal kept in contract with the other GC favourites. On the Vuelta’s previous summit finish, the Velefique last weekend, it had been a very different story.

On a day for mixed fortunes for Ineos Grenadiers, their young racer Tom Pidcock claimed fourth on the stage after taking part in the breakaway of the day. On the downside, Olympic champion Richard Carapaz, second overall in the 2020 Vuelta but well down so far in the 2021 race, quit mid-stage for as yet unspecified reasons.

As of mid-evening, the team’s website limited itself to saying “unfortunately, during the stage, Richard Carapaz had to withdraw.”

Carapaz wrote on social media: “(Sometimes) You have to let go. Thanks Ineos Grenadiers for the opportunity in the Vuelta. We are already working for 2022. Thanks to all who gave me cheers of encouragement, I send you my greetings.”

Cyclingnews has reached out for more information from Ineos Grenadiers.

Bernal was more forthcoming after again climbing on the podium to pull on the best young rider’s white jersey.

“I’m going a bit better, the last climb was very exposed and I’m pleased I could finish with them,” Bernal said.

“It was very windy, but the best thing was to stay calm and stay on the wheels.”

On a day where the GC race only really exploded into life when López attacked, the Colombian described the Villuercas ascent as “strang, hard in some parts, easy in others. But it did a lot of damage right at the end.”

As for his prospects of attacking Roglic or stepping up his GC challenge, Bernal, seventh overall, 2:45 behind Roglic, struck a much more cautious note.

“I don’t know, it depends on how my legs are feeling, we have to wait for the right moment. You have to be intelligent, too, and use your head.”

Sunday’s stage, with another hefty dose of climbing, may prove to be a further testing ground for Bernal. But the third week in the mountains of northern Spain still represents a much more definitive challenge.

Coming back after COVID | Fast Running

Hilary Duff Through the Years | Pictures