Bauhaus wins stage 1 of the Tour Down Under 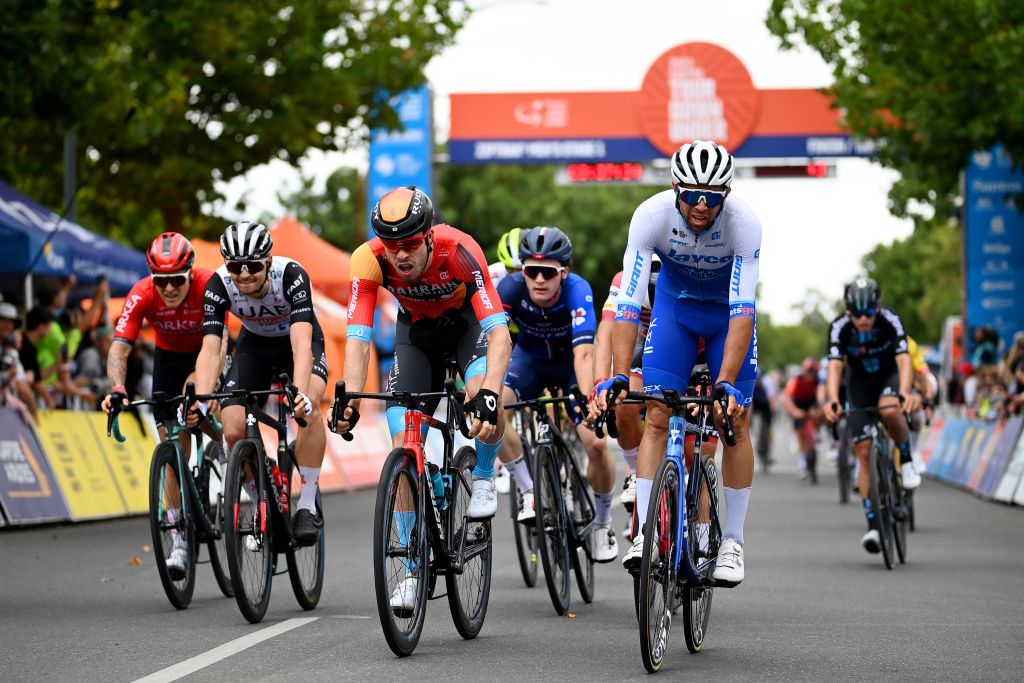 Nans Peters (AG2R) was off the front solo for most of the stage.  Photo/Getty Images

The German rose to the occasion after being involved in an early crash, one of a handful that took place during the second longest stage around Tanunda.

A final crash also happened just 400 metres from the finish line after a disorganised finale and early season nerves. A touch of wheels mid-pack brought down several riders, including best young rider Magnus Sheffield (Ineos Grenadiers) and split the peloton while for those in front the final dash to the line continued to unfold.

After waiting too long to launch and taking fourth in the curtain raiser event, the Schwalbe Classic, Bauhaus was determined not to make the same mistake again.

“This time I was thinking at 250-300m I just go this time,” he told reporters in Tanunda. “The last 50-80m I was just full in pain, I was like, ‘don’t sit down, just keep going’. I knew they were coming in the last metres but I’m super happy I was still in front then.”

Ewan forced to surf wheels in the fast ride to the finish and started his sprint from a few bike lengths back. But when he got up to speed Ewan almost snatched victory from Bauhaus. A desperate bike throw wasn’t enough to take the win but gave him second place. Matthews also showed his form, finishing a close third.

Winner of yesterday’s prologue, Alberto Bettiol (EF Education First) remains in the ochre leader’s jersey after a nervous day of racing, six seconds ahead of Matthews, who moved up eight places on GC after collecting some mid race bonus seconds. Sheffield, despite being caught in the pile up before the line, finished the race and currently sits third overall, eight seconds behind.

The 149.9km stage heading out from Tanunda in the heart of the Barossa wine region started in conditions quite foreign for the Australian summer tour, with temperatures sitting around a mild 20°C.

It was a thick lining of crowds along the start line waiting to watch stage 1, making up for the two lost years when the WorldTour race couldn’t run because of the COVID-19 pandemic. There were early attacks as the field rolled out along the palm-lined Seppeltsfield Road, with views of the vineyards stretching out, but it was when Nans Peters (AG2R Citroën) jumped out alone that there was a move that really stuck, with the gap stretching to reach four and a half minutes by the 110km mark.

It wasn’t long before the Tanunda crowds again switched their attention from the festivities and foods of the South Australian town to assemble along the barriers and watch the riders come through the start/finish line as they finished a first large lap –  which took them out to Greenrock, Nurioopta and Angaston – and started on the smaller loop.

It was Peters that came through the Tanunda to claim the first sprint points of the stage but with only one rider out the front that meant the battle was on within the peloton to sweep up the rest. In the tightest of sprints, Michael Matthews (Jayco AlUla) prevailed to take the two second time bonus ahead of Ethan Hayter (Ineos Grenadiers) who had to settle for one.

The rest of the field was stretched out by the wind up of the pace for the sprint point as it came through to head into the first of the smaller loops, which also included Menglers Hill – the biggest contributor to the stage’s more than 2000m of vertical ascent. The impact of an earlier crash involving Gerben Thisjssen (Intermarche-Circus-Wanty) could be seen.

The rider had made his way back into the field but was now sitting in the peloton with blood on his legs and a ripped up jersey on his back.

In the meantime the news had also come through that one of the overall contenders, Patrick Bevin (Team DSM) had been forced to retire, suffering from the injuries sustained in a crash on Saturday’s Schwalbe Classic.

The second time through the line in Tanunda and the gap had now shrunk to closer to one-and-a-half minutes, with the team of tour leader Alberto Bettiol (EF Education-EasyPost) setting the tempo on the front of the field, with the Australian National Team also on watch to make sure there was no break to ruin a sprint chance for Caleb Ewan.

At just over 55km to go, Peters was caught but there was also a crash within the peloton. Embroiled were two riders from UAE Team Emirates, Sjoerd Bax and Finn Fisher-Black, James Knox (Soudal Quickstep) and Hermann Pernsteiner (Bahrain Victorious), along with riders from the Australian National team, Graeme Frislie, a handy set of fast legs for Ewan’s lead out, among them.

There was also a split in the peloton, catching with some potential players in a sprint finish, such as Kaden Groves caught out but it wasn’t long after the third run through Tanunda that there was a regrouping, with Groves fortunate enough to have Alpecin-Deceuninck teammates and others who were motivated to chase for company.

The final KOM points at under 40km to go on the second last run up Menglers Hill were hard fought between Lucas Plapp (Ineos Grenadiers) and Alessandro Covi (UAE Team Emirates), with Covi hitting the line first.

About 25km to go, with the field on their final circuit, there was a crash at the front of the field with three Jumbo-Visma riders, Timo Roosen, Tim van Dijke and Robert Gesink, who was the worst of those involved.

The final Menglers Hill climb through and just ten kilometres to go to get set for the sprint, riders who were dropped on the ascent were scrambling to get back on while others were positioning to set up their lead out, with the key teams fighting for control but none massing with dominant numbers.

In the end, Phil Bauhaus (Bahrain Victorious) came out on top ahead of sprint favourites, Caleb Ewan and Michael Matthews. Ewan was coming up fast on the German sprinter, but he left it just moments to late and was beaten in a photo finish.

Weekly Wake Up- Live From Your Strengths!