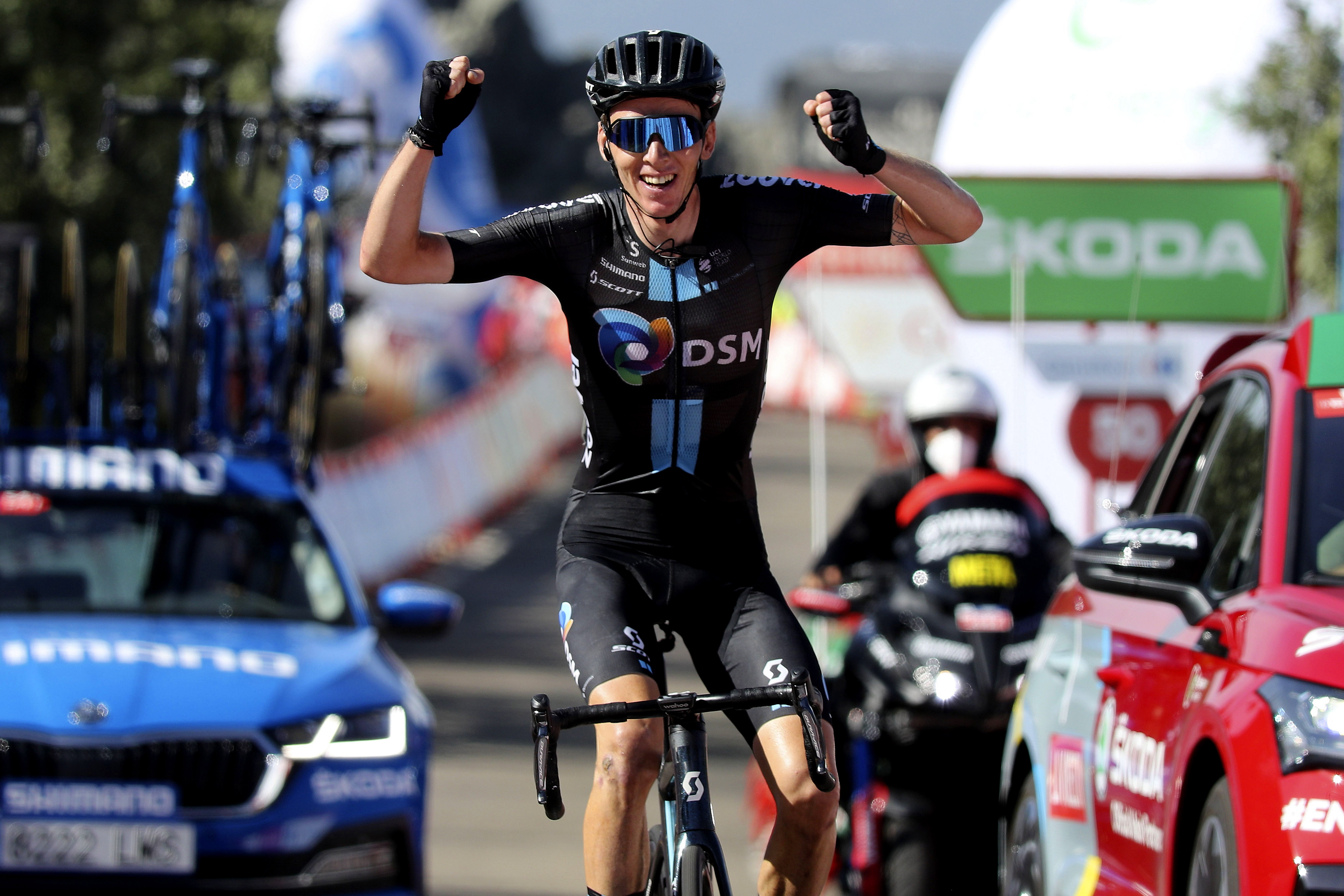 After claiming his first-ever stage win in the Vuelta a España and the third in the race for Team DSM this year, Romain Bardet recognised that there was a point during his breakaway that he thought of dropping back to the bunch.

“With about 30 kilometres to do, there was very little collaboration in the  break of the day,” Bardet said, “and I was getting very annoyed, because I knew with a big final climb, we had to have a lead of at least 10 minutes to be sure one of us would win.

“But Matt [Winston-sports director] convinced me that I should keep going and concentrate on doing my own race, and he was right.”

Guiding him through to Vuelta stage wins is far from the only way that Bardet’s change of team has been beneficial for his career. As a double Tour de France podium finisher and the leader of French WorldTour squad AG2R for many years too, up until 2021 Bardet has always had July as his main season focus.

But while he insisted he left AG2R with no hard feelings on his part and a lot of friends in the team, Bardet said on Sunday that he had needed what he called “a breath of fresh air,” by moving to a different squad.

And although it’s been a rollercoaster month for the 30-year-old with a superb stage win in the Vuelta a Burgos followed up by a bad crash last week, when Bardet stormed away from the break six kilometres from the finish on stage 14 of the Vuelta, he was clearly in the market for victory.

Nearly a minute ahead of closest pursuer Jesus Herrada (Cofidis) at the finish of the windswept Villuercas climb, Bardet explained afterwards that “I’m having a great year with DSM, I’m really well-integrated here and I like their strategy in the Grand Tours of going for stage wins.”

“We’ve already been having a great Vuelta thanks to Michael’s two stage wins, and yesterday I working for [sprinter Alberto] Dainese. Everybody’s equal here.”

“I have excellent memories of AG2R and plenty of good friends there. But I needed a new team.”

Bardet’s situation has certain parallels with another French star, Thibaut Pinot (Groupama-FDJ) who shifted focus from the Tour to the Vuelta a España a few years back looking to find a new kind of motivation.

In Pinot’s case, it worked, as the Frenchman took two stage wins in the 2018 race, and Bardet said he, too, had opted not to do the Tour in 2021 after racing it eight times in a row in his quest of what he called ‘a reset.’

“I’d done the Vuelta after the Tour [in 2017] but I never really had the form. This time I thought it was a good moment in my career to reprogram my races after such a long time.”

“I did reasonably well in the Giro this May,” finishing seventh overall, “and then my idea was I could come to the Vuelta as well because it gave me the chance to prepare it well.”

Bardet’s stage win has also netted him the King of the Mountains lead, a classification he already won in the Tour de France. But he struck a cautious note about fighting for it in Spain, too.

“There are lots of cols to come and the hardest stages in this race are in the third week,” he observed. “But really I’d like to try for another stage. If I get the chance to fight for it by being ahead, then I’ll go for those points on the climbs as well.”

Beyond the Vuelta, Bardet is also looking at the World Championships, where a tough course may well suit him and could see him try for a repeat of his podium in the 2019 road race. But again, as he pointed out, France already has a rainbow jersey to defend.

“I love one-day races, they’re much easier to do than Grand Tours. I’d say I prefer them. So we’ll talk it through with [French national coach] Thomas [Voeckler] but we have to bear in mind we’ve got Julian for the race. But I’d be delighted to take part, for sure.”