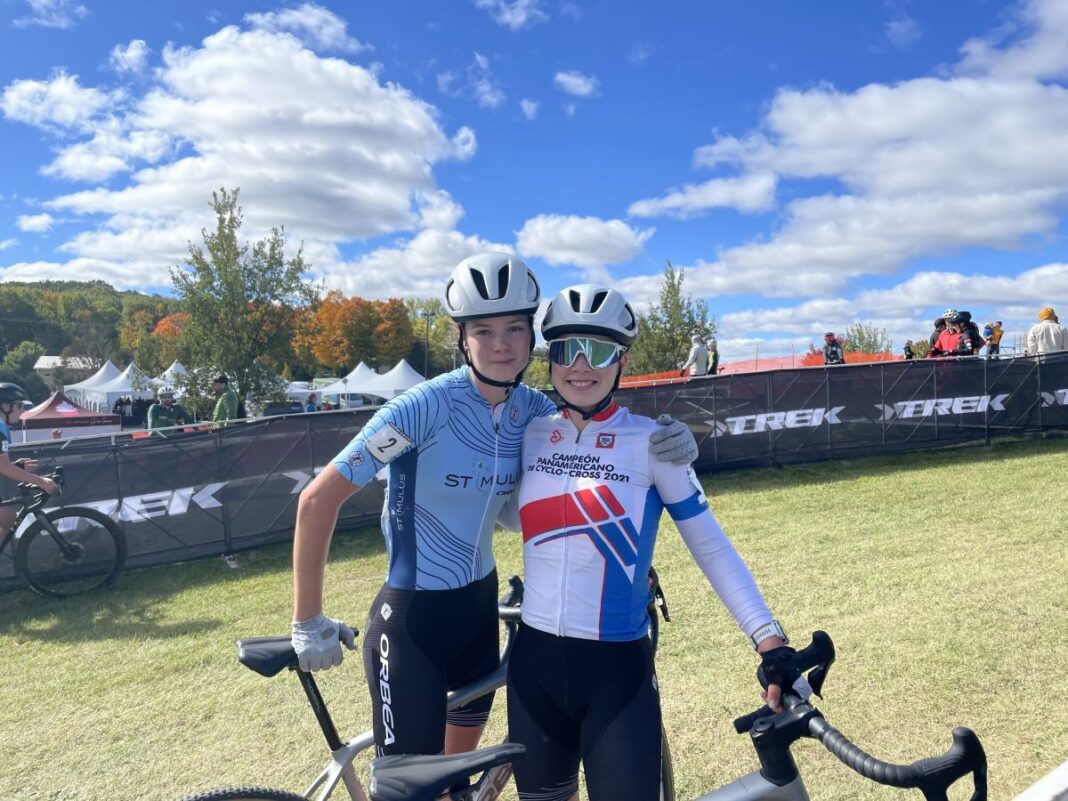 Ava Holmgren wanted to show off her junior women’s Pan-American Cyclocross Championships jersey in World Cup races this season and soared to a podium finish on Sunday at World Cup Maasmechelen in Belgium.

Competition has been fierce, especially since the 17-year-old doesn’t need to look far from home to find her top challenger, fellow Canadian and twin sister Isabella, who was the bronze medalist a year ago at Pan-Ams in Garland, Texas.

The dynamic duo both race for Stimulus Orbea Racing Team and have raced all four UCI Cyclo-cross World Cups this season. They were part of the elite fields in Waterloo and Fayetteville since the junior categories were absent. Both sisters finished in the top 10 of the junior race at World Cup Tabor – Ava one spot off the podium, her first top five at a World Cup. One week later, Ava outsprinted two competitors, Cat Ferguson of Great Britain and French rider Célia Gery, to earn her first podium in a World Cup contest, doing so in Belgium.

“This was a season-long goal of mine and to reach it yesterday was absolutely insane. It means a lot to be racing with other junior women and to be recognized as a World Cup category,” Ava Holmgren posted to Instagram on Monday.

She went on to thank three female cyclists who “help this sport grow and for being such great role models for women over the past years” – the now-retired 10-time British cyclocross champion Helen Wyman, Czech multi-discipline rider Katarina Nash, and three-time elite women’s Canadian cyclocross champion Maghalie Rochette.

There is a tidal wave of rising young stars in the women’s peloton, most evident at this past weekend’s podium sweep in the elite women’s World Cup contest by 20 year olds, the Dutch trio led by Fem van Empel (Pauwels Sauzen-Bingoal) with her fourth consecutive victory. The Holmgren sisters have their eyes on the U23 riders and want to take advantage of a final junior season.

“This will be my last year in the junior category and I’m excited to see how it turns out,” Ava Holmgren told Cyclingnews during the US World Cup swing. “So for the first-ever elite races of the season, I try not to focus too much on results and more about getting in the groove and really gaining all that experience from a different racing dynamic.

“I do have to say that I will be looking at the U23 riders. I’ll be racing against these riders next year, so it’ll be cool to see where I’m up against them.”

Now in the midst of just their second year of junior racing in cyclocross, the Holmgren sisters started with top 20s in the first two World Cups. Their best finish came in Waterloo, Wisconsin, with 15th for Ava and 16th for Isabella. The pair were the youngest competitors in the 34-rider field.

In Fayetteville, Ava moved up to 14th, while Isabella was four positions back, but again they were the youngest.

“I’m really looking to get a good start of my season and try and find the things I need to work on throughout the rest [of the year]. I also want to try and use my strengths as much as possible, to do my best in the technical sections, like the fast corners,” Ava said about the dry conditions for the first two World Cups in the US.

“I feel like I can keep my speed as much as possible throughout them, maybe a course that resembles a mountain bike course. Just really trying to use my skills as much as possible so that when the hard flat sections or climbs come, I won’t be as gassed.”

“I would say in certain races, we’ll work together. But before the race, we always set a certain amount of laps that we’re racing against each other because we don’t let each other win a race. We don’t decide who wins [in advance],” Isabella confirmed about the sister dynamic. “We see who wins by battling it out, especially in the last few laps of the race.”

The sisters are not identical, in appearance or in riding styles. Isabella has the height advantage by several inches and Ava has the deeper voice. However, they both developed technical skills in mountain biking, which is where their brother Gunnar Holmgren now focuses his racing. He’s six years older and has won two Canadian U23 cyclocross national titles, the last one in the 2019-2020 season.

Just a month ago, Ava and Isabella were not planning to take part in the Pan-American Cyclo-cross Championships, which were scheduled to take part for the first time in Costa Rica on November 5-6.

Organisers made a late call to cancel the event when it lost access to the host venue, leaving the Continental Championships in limbo. Then Really Rad Festival of Cyclocross, a longstanding event in Massachusetts, stepped up and added a day in front of its C1/C2 weekend to give the Pan-Ams a new home.

“At the start of the season, I wasn’t planning on going to Costa Rica. But now I get the chance to defend my title, which will be a really big challenge, but I’m looking forward to it,” Ava told Cyclingnews about a short trip to Falmouth from home and a first appearance at Really Rad. “It’ll be either really fast and dry or like a proper mudder. And I’m excited for whatever it is because I enjoy both of those conditions.”