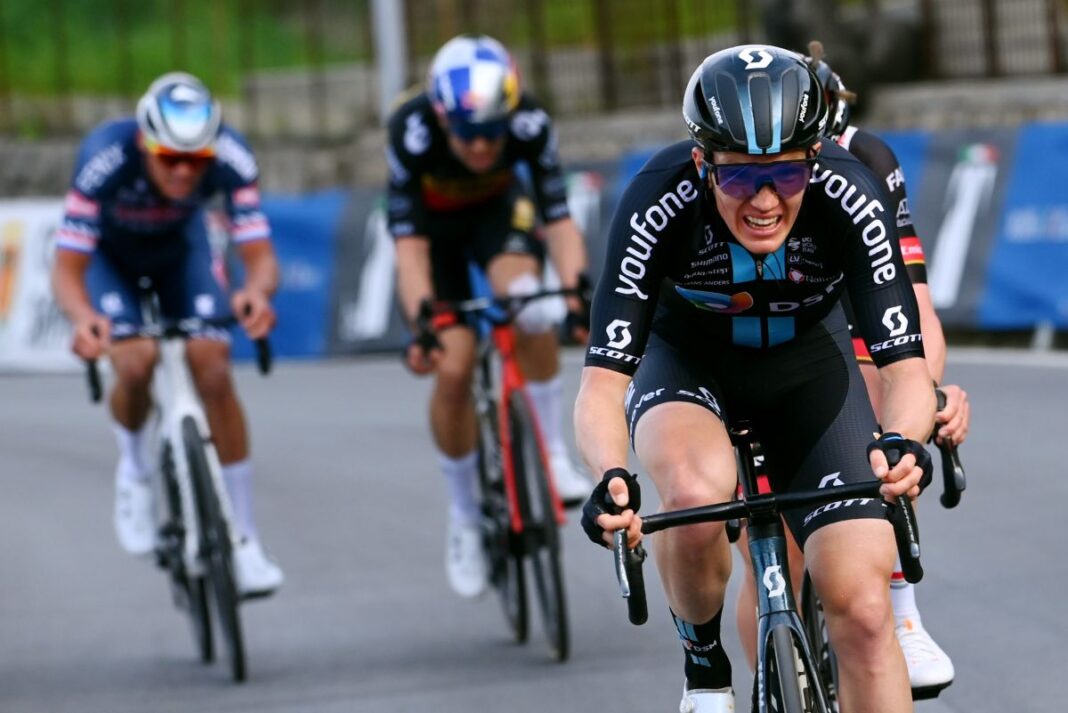 Alpecin-Deceuninck have announced the signing of five new riders for the 2023 season and beyond, with Team DSM’s versatile Dane Søren Kragh Andersen headlining the Belgian squad’s acquisitions as they prepare for their promotion to the WorldTour next year.

The Belgian team has focused on sprints and the Classics with Mathieu van der Poel and Jasper Philipsen and clearly intends to continue that approach in 2023 and beyond in the WorldTour.

27-year-old Kragh Andersen joins having spent six seasons at Team DSM, during which time he has won two stages of the Tour de France and Paris-Tours. He’ll join Alpecin on a two-year deal and will be a key rider in the spring Classics as well as a stage hunter elsewhere.

Quinten Hermans, a runner-up in Liège-Bastogne-Liège this spring, also signs up on a two-year deal from Intermarché-Wanty-Gobert. The Belgian has enjoyed a breakthrough season in 2022 and after a contract dispute with ntermarché-Wanty-Gobert, he will further strengthen the Alpecin-Deceuninck Classics core.

Both Kragh Andersen and Hermans were surprise omissions from their team’s Tour de France squads last month, and both had already looked certain to be heading elsewhere for next season.

“The reason why I have to stay at home is not clear. But it certainly has nothing to do with sport. It is very unfortunate,” Hermans said.

23-year-old sprinter Kaden Groves has signed a three-year contract with the team, meanwhile, ending a three-year stint at BikeExchange-Jayco.

The Australian has taken two wins and 10 podium spots in 2022, including a breakthrough WorldTour victory at the Volta a Catalunya. BikeExchange-Jayco signed Dylan Groenewegen last year and have recently extended Michael Matthew’s contract.

Fellow Australian Jensen Plowright is also set to join for the next three seasons as he moves up from Groupama-FDJ’s Continental development team to turn professional.

The 22-year-old took part in the Tour de l’Avenir last year and has a stage win at Le Triptyque des Monts et Châteaux to his name in 2022.

Finally, Italian rider Nicola Conci will be making the step up from the Alpecin-Deceuninck Development squad for the 2023 season. The 25-year-old previously rode for the now-defunct Gazprom-RusVelo team and was without a team for three months before making the move.

The five signings represent a major strengthening of the Alpecin-Deceuninck squad as the team prepares to move up to WorldTour level for 2023.

Team manager Philip Roodhooft confirmed that they would apply for WorldTour status for the 2023-25 period, and with the team lying in the top 10 of the current points rankings, they should have no trouble in making the step up.

“The WorldTour is the next logical step for the team,” Roodhooft said back in May.

“We see it as a consequence of the growth we had now and winning the ranking of the ProTeams is not a given thing. We have been very happy to do it two times in a row, but it creates a pressure. We’re not afraid of pressure but this gives us a chance to work on the longer term.

How Much Protein Do You Need? | Foundations of Fitness Nutrition