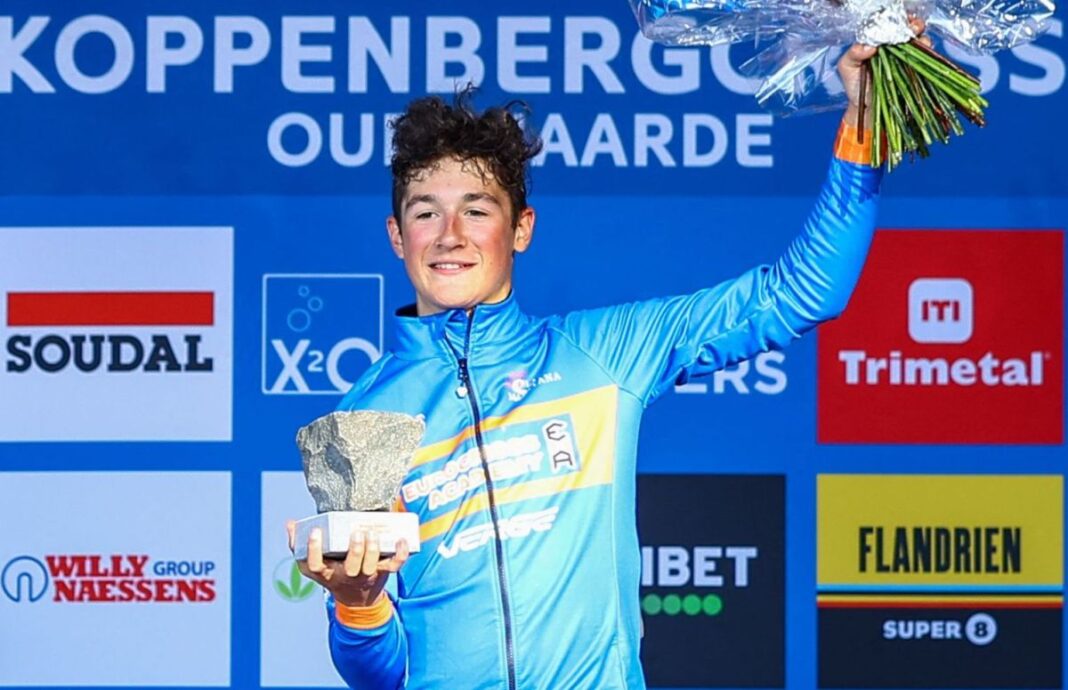 Andrew “AJ” August can now add the title of ‘rock star’ to his growing resume. In November, the upstate New York-native became the first US male cyclocross athlete to win at the iconic Koppenbergcross and take the cobblestone trophy, breaking a 22-year stronghold of victories by European-based men in elite, U23 and junior divisions. He rides cyclocross for FinKraft Junior Cycling Team and on the road for Hot Tubes Development Cycling Team.

The 16-year-old was part of the EuroCross Academy for a second season on a fall block of training that included races in Belgium and Czech Republic, including two World Cups and the X20 Trofee round on the Koppenberg.

He is back in the US preparing for the US Cyclocross National Championship race on December 11 and spoke to Cyclingnews about his goal to strike gold in the men’s junior race on Sunday, a day after his 17th birthday. He also talked about racing on the road in the summer, and how getting his heavy Koppenberg rock home was one of his biggest challenges of the year.

Cyclingnews: Tell us how you got into riding and racing bicycles. Which discipline do you enjoy the most?

AJ August: My family has always been involved in cycling. My involvement started at the grassroots level when my parents would bring me to the races and events they were participating in. My favorite discipline is road racing. I like the team aspect of road racing as well as the long gritty races.

CN: Who is one of your role models for cycling?

AJA: One of my role models in cycling has been Magnus Sheffield [Ineos Grenadiers]. He grew up just a few minutes away from my house and it has been very inspiring to watch what he has done.

CN: Last year was your first racing trip to Europe when you took part in the EuroCross Academy. What was your favorite memory and what was the biggest challenge of being in Europe?

AJA: I think my favorite memory from my first trip to Europe was running into Wout van Aert when we were riding in the forest of Lichtaart. The biggest challenge for me was adapting to aggressive nature of the racing.

CN: You were able to ride a lot of USCX races in the fall of 2021 before that EuroCross Academy. What did you miss about racing in the US?

AJA: The thing that I miss the most about racing in the U.S is being able to travel to the races with my family.

CN: So this was your second season with EuroCross and Team USA, and you are a “veteran”. What did you learn from 2021 that was helpful this time?

AJA: The most important thing that I learned from last year’s trip is to not let one mistake or incident discourage you and that you always need to just keep pushing on in the race.

CN: It was a huge victory you earned on the Koppenberg in early November. You also scored a fourth place in a junior World Cup at Maasmechelen. Tell us about the signature win at Koppenbergcross.

AJA: It was such an amazing feeling to win such an iconic race like the Koppenbergcross. Of course, it is such a physically demanding course with the grueling climb every lap. I knew it was going to be a very tough race with some of the world’s best competition, but my plan was to just ride my own race and it worked out!

We did not have too much time for a celebration afterwards as we had to fly home [to the US] the next morning. That meant most of the evening was spent packing everything up and also trying to figure out how I was going to get the cobblestone back home.

CN: How did getting the heavy trophy home work out?

AJA: I was able to squeeze it into my luggage. It’s now in my room. And definitely, it’s like a Stanley cup to me.

CN: Last year at USA Cycling Cyclocross National you flatted near the end of the junior race and finished second. How do you feel headed to Hartford for the men’s junior race, which is Sunday?

AJA: Yes, last year I was in good position to win but got a flat tire on the last lap. I think I’m in good shape coming into nationals this year and look to carry my confidence. I would say that both Magnus White and my teammate David Thompson will be the top competition.

CN: So both you and Magnus Sheffield grew up in Pittsford, New York, which is near Rochester and Buffalo. It’s in the north-east US so you can drive to US Cyclocross Nationals in Hartford, Connecticut this week. Do you enjoy East Coast weather conditions and terrain?

AJA: I’m happy I don’t need to travel a long way for nationals this year. I feel at home with the east coast weather conditions and the terrain as it can be very cold, and possibly snowy this time of year.

AJA: I am a Bills fan and I hope they can make it happen this year. As far as sports go, that’s the main team that I really have an allegiance to.

CN: You had a solid road season with Hot Tubes this summer at Watersley, and stage races in France and Spain. Tell us about that.

AJA: After the CX National Championships, I went to the Junior Tour of Ireland with Hot Tubes, where we were quite successful. After that I was a guest for Lux Cycling at a race in Austria before racing the Watersley Nations Cup with the US national team and racing again with Hot Tubes in France and Spain. At the end of the road season I was also able to ride with The Cannibal U19 team.

CN: You were second on GC as well as the youth classification winner at two stage races this year, the Vuelta Junior a la Ribera del Duero and La Ronde Des Vallées. Which race did you enjoy the most?

AJA: I really liked racing in Spain. The race was very well-organized and I liked the culture in Spain.

CN: On the road, what style of rider do you consider yourself?

AJA: I would consider myself a good climber and I like to the road when it goes up. The GC is something I also like. I think the combination of climbing, TT and flat races is good for me.

CN: What part of your road riding do you want to improve over the next year?

AJA: Next year I look to improve my ability to put myself in [contention] and hold good position in the group.

CN: You are busy with high school still, so tell us about that and your future aspirations.

AJA: Yes, I am in school, but I do school virtually which has been very nice with all the travel involved with cycling. Going forward with my education I think I will have to see where cycling takes me in order to decide exactly what I do for a further education, but I want to obtain some sort of higher education. I definitely want to pursue a professional career in cycling. I hope that in five years I will have my place in the professional peloton.

CN: Between cyclocross and road racing you don’t have much of an off-season. When do you plan to take some time off in the near future? How do you spend your perfect “rest day”?

AJA: It’s tough to find time to take a break while racing road and cyclocross but I plan to take a break after the cyclocross season and again after next year’s road season. I think a perfect rest day for me is doing things like going to my family’s lake cottage and just doing [things] outside that’s away from cycling.