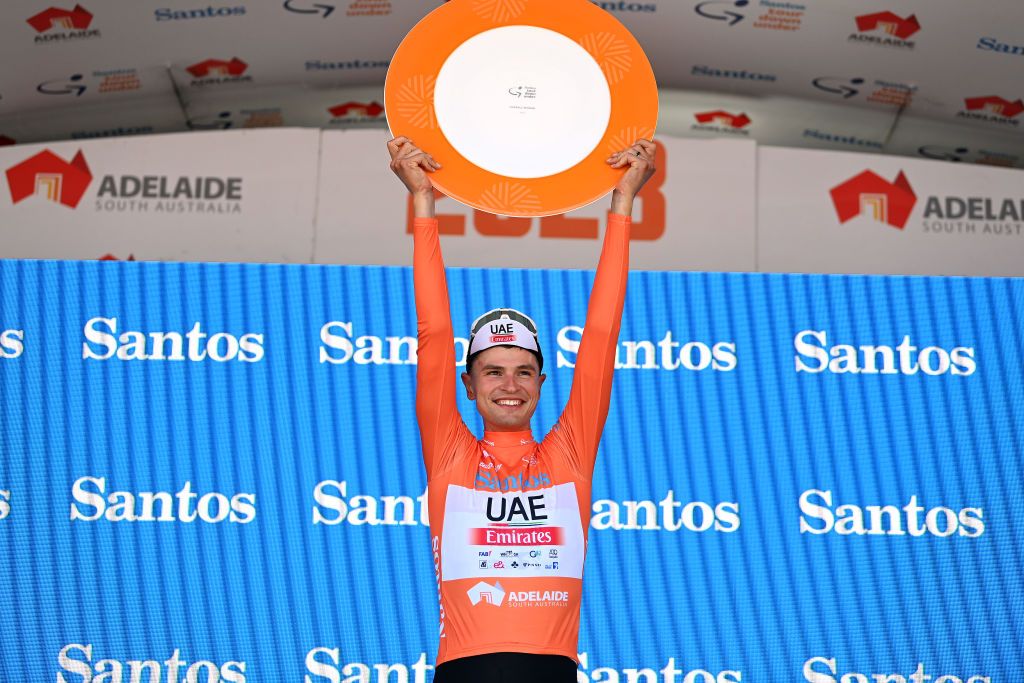 Jay Vine didn’t put a foot wrong at the Santos Tour Down Under, securing the leader’s ochre-coloured jersey on stage 3 and then diligently defending that lead and when the almost inevitable attack came from second placed Simon Yates (Jayco Alula) on the final climb of Mount Lofty.

His winning strategy for the final stage was simple.

Vine wasn’t about to risk his first WorldTour stage race win for a stage victory. It was a calculation that reflects the calm and measured way in which he and his UAE Team Emirates squad took on the entire race, making it easy to forget that this was just his first time at the Tour Down Under and first race with the team.

“I’m a big fan of Alain Prost from Formula One and you know his philosophy was take the risk when you can and when you have the opportunity, go all in,” Vine said.

“And that’s how I basically rode the race, so you know not getting greedy and going for stage wins when I could take as much time as possible.”

“That’s why it was a lot easier on the boys today because we had a 15 second buffer over the other two,” Vine explained, referring to Yates and Pello Bilbao who both started the day 15 seconds back from Vine.

At the end of the final 112.5km stage with more than 3,131m of climbing and five ascents of Mount Lofty, Vine climbed on the final podium with an eleven second lead on Yates and 27 second gap to Bilbao (Bahrain-Victorious) in third.

Quite a result for a rider who wasn’t even on the start line, let alone a professional cyclist, the last time the event ran as a WorldTour race in 2020, when he wasn’t selected for the National Australian team.

“Well, I guess it’s good that I didn’t get a start in this race because now I get to say that I won the race on debut,” joked Vine, more relaxed and talkative with victory secured.

“I don’t know if it says anything about selections for the Uni SA team, but I’m super happy to be where I am right now and that’s all behind me.”

It is also clear just how much is ahead of him.

Vine has already has two Vuelta a España stage victories and now his first WorldTour stage race. He has a key leadership role at UAE Team Emirates and is expected to line up at the Giro d’Italia this year alongside João Almeida.

He has also won the time trial title at the Australian National Championships, confirming his potential as an Grand Tour contender.

Yet Vine isn’t prepared to jump too far ahead at this stage.

“I don’t think the Tour Down Under is an accurate representation of Grand Tour form but you know what, you never know,” he said when asked about whether he now had confidence he could be a GrandTour contender.

“I’m only just at the start of my build for the year, so we’ll see what happens in the next races.”

There is plenty more “fun” to come, he insisted.

For now it’s time for one drink to celebrate his victory and some time to enjoy what he has achieved at the very start of a long season.

“My wife keeps telling me … ‘just enjoy the moment, you like riding your bike’,” Vine said.

“And that’s what I think de-stressed me a lot this week. I really enjoyed yesterday, I really enjoyed today. You know, as much as it was like, ‘okay, tick the kilometres down’, it’s just fun riding my bike and racing like that. That was really proper good fun.”

This Gluten-Free Garlic Cheddar Biscuits Recipe Is So Cozy

HOW TO GET BACK INTO SWIMMING AFTER LOCKDOWN