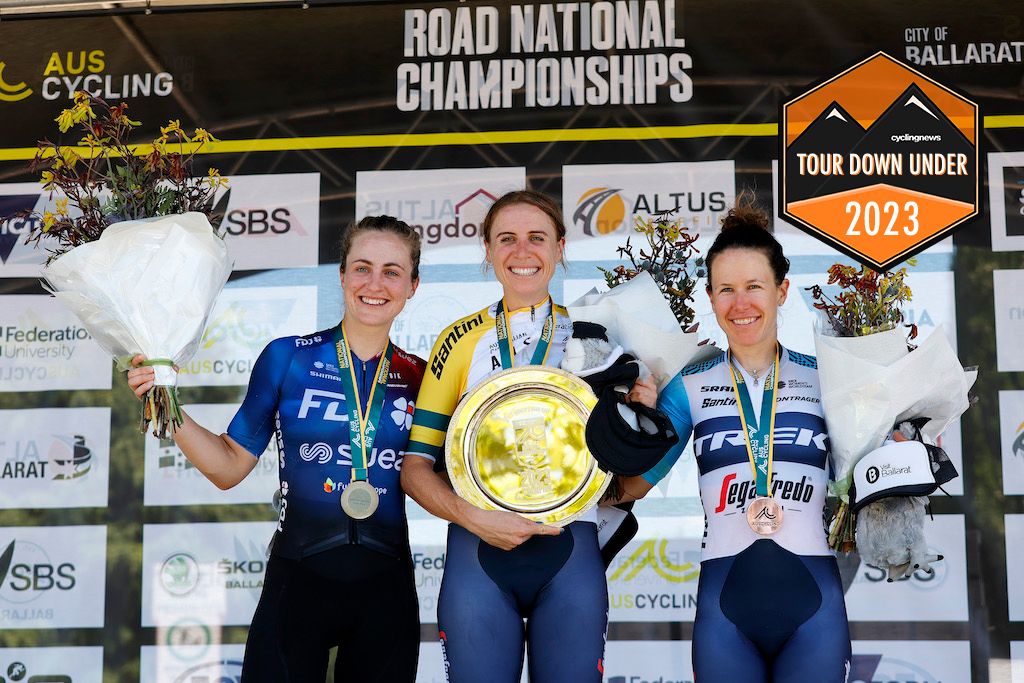 In what has been a 12-year build toward the top tier for women’s racing, the three-day race will be held from January 15-17, where the overall winner will also take home the series’ first leader’s jersey of the professional racing season.

The event will host six Women’s WorldTeams, along with four Continental teams, a domestic squad and two national teams from Australia and New Zealand, for a total of 78 riders. Cyclingnews highlights just some of the riders to watch.

Join Cyclingnews for live coverage of the 2023 Women’s Tour Down Under, and check in after each race for our full report, results, gallery, news and features.

It’s been an exciting start to the year for Amanda Spratt as she began her racing season on home soil under the brand new colours of Trek-Segafredo and secured podium finishes at the Bay Crits and in the road race at the Australian National Championships.

She enters the Women’s Tour Down Under with a target on her back as a three-time winner, having won the marquee home stage race in 2017, 2018 and 2019. Now in its first edition on the Women’s WorldTour, and with a fresh outlook on her career, Spratt will aim to win a record fourth overall title.

The route is well-suited to her strengths as a punchy rider, especially for stage 2 into Uraidla, and her strengths in the longer climbs will be an asset for the hilly queen stage 3 finale, which includes Corkscrew Road into Campbelltown.

Grace Brown will lead FDJ -Suez off the back of a consistently strong 2022 season. Her strengths are in the time trials, with a gold medal at the Commonwealth Games and a silver medal at the World Championships, and she recently won her third time trial national title in Mount Helen.

While there is no time trial at the Women’s Tour Down Under, her strength in this discipline shows her capacity to attack and hold off the peloton. She’s a savvy, versatile rider, and last year, she was seventh at the Tour of Flanders, second at Liège-Bastogne-Liège, took a stage win and second overall at the Women’s Tour, and won a stage at the Challenge by la Vuelta.

Short and hilly stage races are, generally, her forte, and given her recent run of success in the time trial at the Wollongong World Championships and Australian National Championships, where she was also second in the road race, it would be no surprise to see her carry that form into an overall title at this year’s Women’s Tour Down Under.

Alex Manly proved again she is not just a track rider, or for that matter only a support rider on the road, with a standout season last year with some head-turning performances across the Spring Classics and summer-fall stage races on the Women’s WorldTour.

She was the highest-placed finish among her team in many of the hilly Spring Classics before putting on a show at the Thüringen Ladies Tour, where she won four stages and the overall title. Then at the Women’s Tour, she showed off her sprint when she finished second behind Lorena Wiebes on stage 3 and finished fourth overall. Later in the season, she won a stage and finished third overall at the Tour of Scandinavia and took three top-10s in stages at the Challenge by la Vuelta.

Opening her road racing season with newly-named Team Jayco AlUla will certainly give the home team a card to play in stages and the overall GC.

The American rider was also a stand-out performer last year, with results that marked her best season after switching to EF Education-TIBCO-SVB. An eighth at Flèche Wallonne, fourth overall at Vuelta a Burgos, and an overall victory at Tour Féminin International des Pyrénées, Doebel-Hickok has hit her stride in the hilly to mountainous terrain.

She sustained a broken collarbone in a crash while racing stage 2 Ceratizit Challenge by La Vuelta, which marred the end of an otherwise successful season, and meant that she could not participate at the World Championships in Wollongong.

She is no stranger to the Australian summer racing season, having excelled in the Women’s Tour Down Under with fourth place overall in 2019. Healthy and fully recovered, watch for this climber on the final stage into Campbelltown.

Brodie Chapman is the newly crowned road race national champion, and she will be showing off her new jersey with Trek-Segafredo. A second card to play in the GC, alongside Amanda Spratt, Chapman is one to watch for the winning breakaways.

Although the opening stage appears to be one for the sprinters, there is a late-race ascent over Chaffeys with an average gradient of 5.9%, coming at a little more than 30km into the racing. Stage 2 could also present a prime opportunity for a breakaway with two categorised climbs into Uraidla.

If Chapman can repeat her national-title-winning breakaway at the Women’s Tour Down Under, it could net her at least a stage win and, perhaps even the overall victory.

While Alex Manly will likely be a contender for the overall title at the Women’s Tour Down Under, we cannot overlook her Jayco AlUla teammate Ruby Roseman-Gannon for the overall and particularly for the opening stage sprint to take the event’s first leader’s jersey in Aldinga.

Roseman-Gannon swept up the title in the Santos Festival of Cycling last year and has again come into this season in prime condition, winning the first two stages and the overall title at the Bay Crits. She was also fourth in the road race and time trial at the National Championships.

Perhaps even more impressive were her performances during her first season racing in Europe in 2022, where she opened her account, finishing second behind then-World Champion Elisa Balsamo in her first race at Setmana Valenciana. And she did more than prove her strength as a sprinter, finishing in the top 10s at the hilly Spanish races Gran Premio Ciudad de Eibar, Emakumeen Nafarroako and Navarra Women’s Elite Classics, and took a couple of top 10s at the Thüringen Ladies Tour. She earned a spot on BikeExchange-Jayco at the rebirth of the Tour de France Femmes, where she finished eighth on stage 4 into Bar-Sur Aube, and then closed out the season with fifth overall at the Simac Ladies Tour.

It will be exciting to see what this 24-year-old can do with her first successful year of racing on the Women’s WorldTour under her belt.

A Canadian racing abroad with big dreams of moving up to the WorldTour ranks, Simone Boilard is a former junior women’s road race medallist at the World Championships.

Boilard will compete in her second season with St Michel-Mavic-Auber93 in 2023, which field two cards to play at the Women’s Tour Down Under alongside Coralie Demay.

She found a home with the France-based team after recovering from surgery to correct iliac artery endofibrosis and a nearly-fatal sepsis infection in 2020.

Top-10 performances at the Bretagne Ladies Tour, RideLondon Classique, Diamond Tour, Tour de France Femmes, and Tour de l’Ardeche, along with a third place at the Canadian Championships behind winner Maggie Coles-Lyster (Zaaf), who is also racing in Australia, show that she consistently grows stronger each season.

A savvy rider who can both sprint and climb, Boilard is on the cusp of a big win, and the Women’s Tour Down Under could be her chance to shine.

Rachel Neylan will line up with the Australian National Team as she begins her 13th season of racing in the professional peloton. She likely won’t be joining her Cofidis trade team until the European spring season, but at the Women’s Tour Down Under, she will have a strong team that includes last year’s Australian road champion Nicole Frain and Josie Talbot.

While the team, on paper, is not as strong as some of the participating WorldTeams, Neylan brings a wealth of experience to the race. Stage 2 will suit the team’s chances to execute a breakaway, while Neylan can hold her own on some of the steeper climbs, especially on the queen stage 3 finale.

The 2012 World Championship silver medallist has been striving to get back to her best after several team setbacks in recent years. In 2021, Neylan made a mid-season transfer to Parkhotel, finished 6th at the Tour of Norway, and took two podium results at Giro dell’Emilia and Tre Valli Varesine, signs of a comeback. She then came into the 2022 season with a new contract with Cofidis and a focus on the Tour de France Femmes, where she finished 28th overall. Watch Neylan continue her late-career upward trajectory to kick off the 2023 season.

Health and fitness books women should read in 2023 –