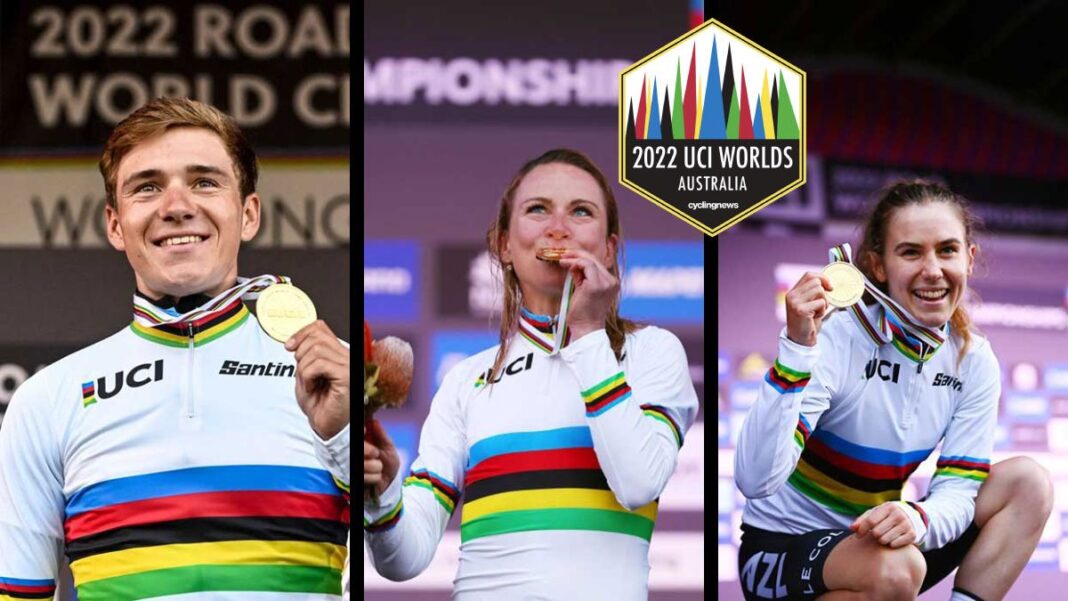 During a week of racing in Wollongong, Australia, the 2022 UCI Road World Championships crowned 12 individual champions and Switzerland as the best mixed team.

While Great Britain topped the medal table, in the elite men‘s and elite/U23 women‘s races, the winners were two of the biggest stars riders in the peloton. Each rider won in a different way, with Saturday and Sunday’s races bringing powerful solo victories from far and close to the finish line.

Because of the time zone differences, many fans around the world had to choose between a good night’s sleep and watching the elite races in the middle of the night so Cyclingnews brings you the official highlight videos from the two marquee events from the weekend.

Remco Evenepoel (Belgium) soloed in for the coveted rainbow jersey but that was only part of the day’s narrative. After the 2021 Worlds went up in flames for the host country, it was a different story on Sunday.

After France had attempted to blow the race apart early on Mount Keira, the race settled into a familiar breakaway pattern before the nation tried again on Mount Pleasant just under 80km from the line.

The move eventually delivered a front group bereft of many top favourites, though Evenepoel made the cut alongside several Belgian teammates. At 35km out and with the main peloton lagging well behind, he made what would turn out to be the decisive move of the day, dragging Kazakhstan’s Alexey Lutsenko with him.

He’d go it alone up another ascent of Mount Pleasant 10km later, powering away to a dominant win over two minutes up on anyone else as the peloton charged past the breakaway survivors within the final kilometre to deliver Christophe Laporte (France) and Michael Matthews (Australia) to silver and bronze.

Saturday brought the first-ever combined elite and U23 women’s road race, with 2019 champion Annemiek van Vleuten (Netherlands) lining up supposedly as a team domestique following her elbow fracture during the mixed relay TTT.

She would, at the end of the 164km race, stunningly jump away to steal a late victory, though, coming from behind to take the rainbow jersey once again.

After the day’s break was caught just outside the final hour of racing, a succession of strong moves went away at the front, including Marlen Reusser’s (Switzerland) attack at 12km to go.

She was caught on the final ascent of Mount Pleasant, however, with the Dutch and Van Vleuten among those putting in the work to shut down that and previous moves. A powerful counter-move and a regrouping came in the finale, before Van Vleuten jumped from the rear of the elite lead group to claim a dramatic victory.

With her 12th place across the line, Niamh Fisher-Black (New Zealand) claimed the first-ever U23 women’s road race title, 12 seconds ahead of Pfeiffer Georgi (Great Britain).