It’s Time To Ban Phones in the Classroom 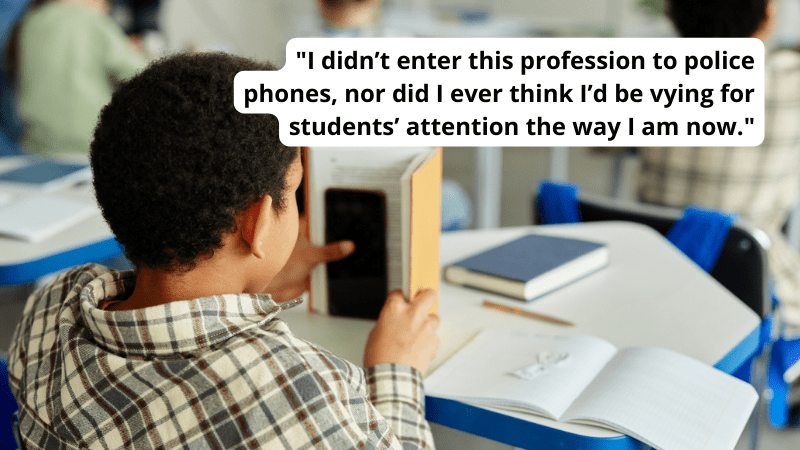 The number of technological tools teachers and students have at their disposal is impressive. I graduated from high school in the 2000s, so I’m not ancient, but even I can appreciate how far we’ve come in the last 20 years. That said, I’m worried about how phones have impacted my students and their learning, and I think it’s time schools put firmer policies in place that ban phones in the classroom. Here’s why.

As a high school teacher, phones are a constant distraction.

I didn’t enter this profession to police phones, nor did I ever think I’d be vying for students’ attention the way I am now. And this issue isn’t new: It’s been problematic for years, but in my experience it’s getting worse. In a 2019 study, 45 percent of teens said they are “nearly constantly” online.

My students are addicted to their devices.

They navigate the halls with their heads down and thumbs frantically typing. They plop down into their seats just before the bell and continue to scroll away. Typically, I stand in the halls between classes to greet students as they enter, and it’s alarming how many won’t reciprocate a greeting or didn’t hear my greeting because of their earbuds. It’s bad. And if teaching wasn’t already hard enough, this exacerbates everything.

More so than any other year, I’ve noticed a significant correlation between classroom grades and phone usage.

Those who are on their phones frequently or while I’m instructing are often missing out. It’s hard to perform well in class when you skip the assigned reading, tune out during anything instructional, and have a real dependency on YouTube. It’s sad that students can’t go 56 minutes without checking Twitter, Instagram, or TikTok. They can’t have their devices on their person and self-regulate. They just can’t. Sadly, many adults can’t either. So why allow this in the classroom?

I’ve tried asking students to put their phones away during class.

The calculator caddies or pocket charts are a great idea—numbered slots assigned to each student in the classroom. Students are expected to dock their phones in the appropriate slot during class time. As someone who has adopted this type of procedure, I can say it was somewhat successful. Most students were compliant, some needed just a gentle reminder, and only a few were blatantly resistant. Overall, it was good.

However, when COVID-19 hit, I abandoned this policy due to hygienic concerns.

With all the uncertainty and fear, I’m not sure parents would have responded well to mandatory cell phone confinement on the wall chart, especially with multiple classes making use of the same chart. Amid the mask-wearing and frequent desk-cleaning, it didn’t seem like a good idea.

In search of more flexible alternatives …

I understand that some teachers appreciate phones as learning devices. For instance, Kahoot is a popular quiz game that students enjoy, and it requires them to use their phones. It’s awesome technology, but once the students have their phones out, it’s difficult to monitor all activities. If they’re allowed to keep phones in their possession all hour, you’re competing for their attention at some point. It’s inevitable.

Using a whiteboard cue is another method for regulating classroom phone use. At my school, teachers were issued a two-sided phone icon to affix to the board. The green side indicates appropriate time for phone use and the red side prohibits it. Now, this is a nice idea in theory. If it’s time for a Kahoot, the green icon is on display and students do their thing. When it’s over, the red side makes an appearance, and goodbye phones. It sounds simple enough and, sure, students will adhere to it for a bit, but it’s tough to manage over time. Also, sometimes teachers forget to flip from green to red. And students won’t be quick to point out that mistake, I promise.

In my opinion, it’s time to ban phones altogether.

I believe we’re at the point now where a school-wide ban on phones is the best option. The argument for academic use just doesn’t hold much weight for me. It’s a detriment. Besides, computer labs and school-issued Chromebooks are just fine for anything academic.

One of the most obvious benefits is the consistency it promotes among the staff. If you have one teacher with a strict no-phone policy, one with something in the middle, and one without any restrictions, it divides us. After the last few years in education, students need consistency. In fact, we all do. I’d love to see students walk through my door with their heads up, faces smiling, and ears free of any type of bud. I want to believe that the class period can be filled with engaging discussion and critical thinking instead of TikTok videos and apathy.

Additionally, eliminating the phones entirely would do wonders for students in learning how to appropriately interact with adults and develop social etiquette. Our ability to effectively communicate with others is so important, and we need to get back to cultivating it in schools. Removing the phones is a step in the right direction. We all need that.

Do you support banning phones in the classroom? Why or why not? Please share in the comments.