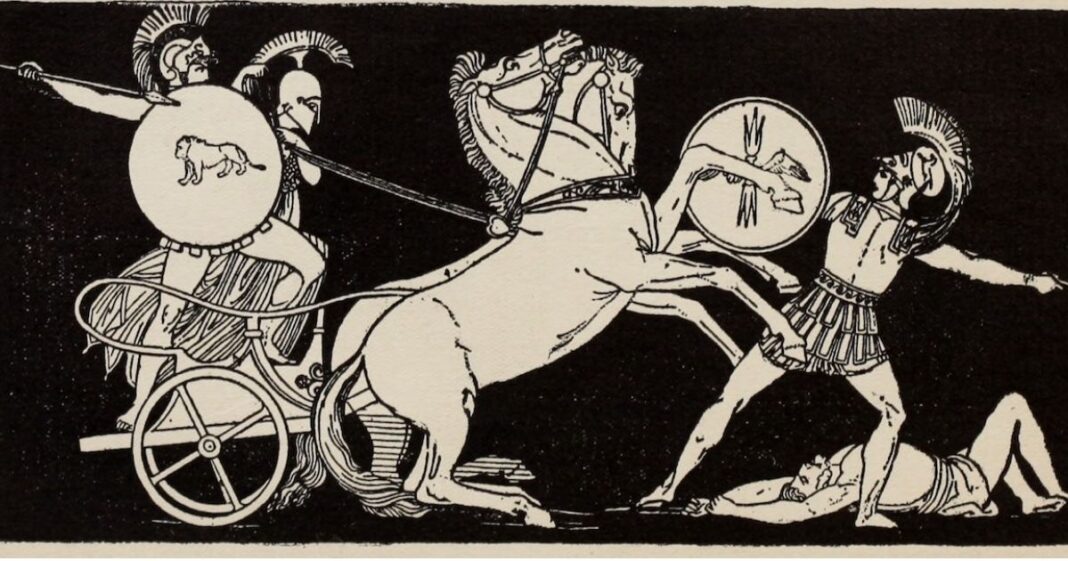 The “classics” cover a lot of genres, authors, and thousands of years. Have you ever wondered where to start, or which classics your high schooler should read first? Picking and choosing your book list can be overwhelming. We’ve narrowed it down for you!

Ancient history provides us with incredible literature that has influenced authors for thousands of years. You and your students will enjoy trying to figure out which author references which piece of work. There are depths of wisdom from ancient authors just waiting to be plumbed. Plato wrote, “the goal of an education is to love what is worth loving.” This list can be used as a resource alongside Dave Raymond’s History series as well.

Looking for an ancient history curriculum?

This most famous Greek tragedy is based on a Greek myth about Oedipus, the king who killed his father and married his mother. It is a dark story but rich with its themes of fate, blindness, and family. The play is the second in the account of the Oedipus’s life.

A Greek tragedy written around 441 BC, this play is the last in the series about Oedipus and covers the story of Antigone, a young woman who puts her fealty to her brother over everything else.

3. The History of the Peloponnesian War by Thucydides

The ancient world was fraught with wars and battles and one of the most significant was the Peloponnesian War. It defined the Greek Age and her famous city-states, changing the future of this magnificent culture.

Almost every culture and country has its records of its past. Herodotus’ account of ancient Greece, Western Asia, and North Africa is one of the most important in literature and history.

Like Herodotus, Plutarch is considered incredibly important to historians and writers. His account of famous Greek and Roman men have influenced authors and historians for thousands of years. Some of these men include Alexander the Great, Julius Caesar, Demosthenes, Cicero, and Theseus.

6. The Poetics by Aristotle

Aristotle was Plato’s student and one of the most important philosophers in the world. This work describes Greek dramatic theory and and a philosophical treatise on literary theory. It is also the oldest surviving piece of work in this genre.

7. The Republic by Plato

Plato is the second of the three most famous Greek philosophers and studied under Socrates. His work, The Republic, is a Socratic dialogue explaining philosophic works, political theory, and the concept of justice.

The story of the final year of the Trojan War, the Iliad is one of the greatest of the epic poems. Its cast is filled with giants of literature and mythology such as Agamemnon, Odysseus, Athena, Achilles, and Zeus. This is a poem everyone should read at some point in their lives.

There is some intense violence throughout the story that may be overwhelming for younger teenagers.

9. The Aeneid by Virgil

Often read alongside the Iliad and the Odyssey, Virgil’s epic poem describes the mythological beginning of the Roman culture and the adventures of Aeneas, founder of Rome.

The author unknown, this is the earliest piece of literature known to mankind. It is the Babylonian account of how their gods and goddesses created the world the Babylonian culture.

There is one scene in particular that is pretty sexually explicit and you may want to censor for your students.

An epic Latin poem, Ovid describes the history of the world from its creation all the way to Julius Caesar. He weaves mythology and and history together into a beautiful piece of literature that has influenced authors like Dante, Chaucer, and Shakespeare.

Like The Epic of Gilgamesh, this poem contains sexual scenes that may be disturbing to younger teenagers.

C. S. Lewis takes the famous Greek myth, Cupid and Psyche, and rewrites it into the story of two sisters living in ancient Greece. Lewis considered it his most mature piece of fiction.

13. The Faerie Queene by Edmund Spenser

This is an epic English poem about six key virtues embodied in different characters such as the Redcrosse Knight, Sir Guyon, and a female knight named Britomart. Arthurian legend is woven throughout this fantastic poem.

John Milton wrote this English epic poem in 1667 about the serpent’s conversation with Eve in the Garden of Eden. Satan almost seems to be the protagonist in the story, something that has sparked controversy for hundreds of years.

History that Complements the Classics

History is best understood through the dual lenses of dramatic story and godly wisdom. Dave Raymond teaches history by applying a Christian worldview to characters, events, theology, literature, art, and religious beliefs of a culture. His classes are available individually, in bundles, or as part of a subscription.

* Contains violence that may be a bit mature for some audiences.

Best triathlon saddles 2022 – Comfort and power in the aero position