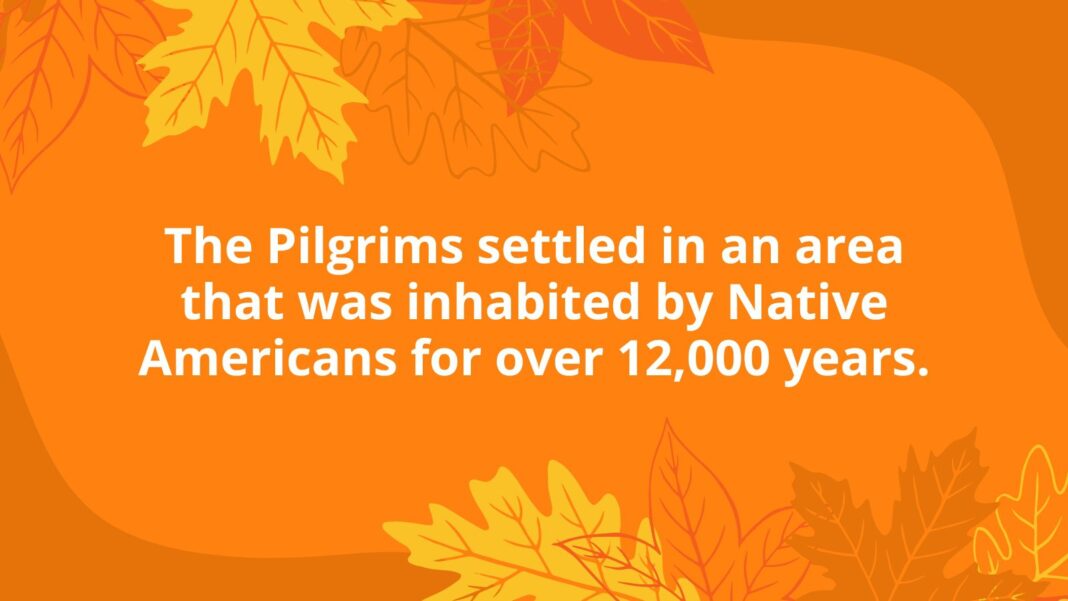 The Thanksgiving holiday has a long history, but its meaning continues to evolve with each generation. Today, many choose to see it as an opportunity to step back and be thankful for all of the good we have in our lives. While we’re encouraging an attitude of gratitude in our classrooms, why not share some fun and informative Thanksgiving facts to lighten the mood? You could even use these Thanksgiving facts as a trivia game!

The Pilgrims settled in an area that was inhabited by Native Americans for over 12,000 years.

Long before European settlers, often called Pilgrims, arrived on the East Coast of the United States in 1620, Native American tribes inhabited the area. The Wampanoag people had called the region known as southeastern Massachusetts and eastern Rhode Island home for more than 12,000 years. Today, about 4,000 to 5,000 Wampanoag live in New England.

The Pilgrims and the Native Americans made a treaty of mutual protection.

When the Pilgrims first arrived in the United States, they raided Native American corn fields and robbed Native American graves. However, in March 1621, the Pokanoket Wampanoag leader Ousamequin (also known as Massasoit to the Pilgrims) made a treaty of mutual protection with the Pilgrims. They agreed not to steal from or hurt each other. They also promised not to bring any weapons when they met with each other. Finally, the two groups decided to serve as allies in times of war. The treaty lasted for about 50 years until the United States began a series of deadly attacks on Native Americans.

The Native Americans celebrated many days of thanksgiving long before the Pilgrims arrived.

In the fall of 1621, Native Americans joined the Pilgrims during their Harvest Home celebration.

Sometime between September 21 and November 9, 1621, after a long period of sickness and little food, the Pilgrims finally had a bounty of crops. They gave thanks for the fortune their hard work brought them by celebrating Harvest Home, an English tradition, on the last day of the harvest. We don’t know exactly why, but we do know that the Wampanoag leader Massasoit and about 90 of his men celebrated with the English for three days with feasting and entertainment. It wasn’t until the 19th century when it became a popular belief among Americans that this event was the First Thanksgiving. Many facts surrounding this thanksgiving celebration are unclear, but the best account we have is this letter written by an English settler named Edward Winslow.

The first national day of thanksgiving in America was established to celebrate a victory over the British in the Battles of Saratoga in 1777. President George Washington called for another day of thanksgiving on the last Thursday of November 1789 to celebrate the end of the Revolutionary War and the ratification of the Constitution. American leaders also issued Thanksgiving Day proclamations following major Civil War victories.

Abraham Lincoln made the first official proclamation of a national Thanksgiving holiday in 1863.

For 17 years, Sarah Josepha Hale, the woman who composed “Mary Had a Little Lamb,” wrote letters in support of an official Thanksgiving holiday. Finally, on October 3, 1863, President Abraham Lincoln started the tradition that continues to this day.

Among adults, Thanksgiving ranks as the second-favorite U.S. holiday, ahead of Halloween but behind Christmas.

“Frozen” was the biggest Thanksgiving movie opening of all time.

The Disney animated film took the world by storm in 2013, earning $93 million domestically.

Want to visit them? You’ll find them in Arizona, Louisiana, North Carolina, and Texas.

The turkey could have been America’s national bird.

One of the Founding Fathers wasn’t fond of the choice for our national bird, the bald eagle. Benjamin Franklin thought the turkey was a “much more respectable bird,” and in a letter to his daughter, he wrote, “I wish the bald eagle had not been chosen as the representative of our country. He is a bird of bad moral character.”

That’s the equivalent of more than 40 million turkeys!

During November and December, the Butterball Turkey Hotline answers more than 100,000 turkey-cooking questions.

Minnesota produces the most turkeys in the United States.

With 450 turkey farms, the state produces around 40 million turkeys and is responsible for about 18% of all turkeys in the United States every year.

JFK was the first president to pardon a Thanksgiving turkey.

On November 19, 1963, just three days before his assassination, John F. Kennedy became the first American president to publicly spare the turkey, who was wearing a sign that read, “Good Eating, Mr. President!” Abraham Lincoln, an avid animal lover, was the first to unofficially pardon a turkey (who was a beloved pet of his son, Tad).

George H.W. Bush made pardoning the turkey a formal tradition.

The annual pardon of the White House turkey has been going on since 1989.

About 50 million pumpkin pies are eaten at Thanksgiving each year.

Incredibly, despite the popularity of pumpkin pie, there’s still one type of pie that Americans love more: cherry pie.

The average number of calories consumed on Thanksgiving is 4,500.

All of that turkey, stuffing, and pie really add up!

According to a Harris Poll, 81% of Americans actually look forward to the leftovers more than the Thanksgiving meal itself.

Love those Swanson TV dinners? Back in 1953, the company overestimated the demand for Thanksgiving turkeys. They put together 5,000 aluminum trays of turkey meals using the 260 tons of leftover frozen birds. The following year, they sold an astounding 10 million turkey dinners!

Plumbers are busiest on the day after Thanksgiving.

According to Roto-Rooter, more people call for a plumber on the day after Thanksgiving than on any other day of the year. Things like turkey grease and even potato peelings tend to clog up drains.

More than a million people participate in a turkey trot each year.

Americans sure love their turkey trots! Around 1,000 of these holiday races take place around the country on the morning of Thanksgiving.

The first turkey trot had only six runners.

The first turkey trot took place in 1896 at a YMCA in Buffalo, New York, as an 8k race. It included just six runners, only four of whom made it to the finish line. One runner dropped out when his “late breakfast refused to keep in its proper place,” and another dropped out after two miles.

Additionally, 3.5 million people attend the parade in person, and about 10,000 people participate in the holiday event.

Macy’s introduced giant balloons at the Thanksgiving Day Parade in 1927.

Invented by Tony Sarg, a puppeteer and theatrical designer, the original oversized balloons were shaped like animals and filled with oxygen.

The first video game character appeared at the Macy’s Thanksgiving Parade in 1993.

Sonic the Hedgehog made history at the Macy’s Thanksgiving Day Parade. Unfortunately, high winds made it hard to control the balloon, and two people were injured.

It was a college match between Yale and Princeton. It was so popular that Thanksgiving was subsequently chosen as the date of college football championships, and the NFL started its own tradition in 1934 when the Detroit Lions faced the Chicago Bears at the University of Detroit Stadium.

Composed by James Pierpont in 1857, “One Horse Open Sleigh” was written for children celebrating Thanksgiving. The song immediately became popularized as a Christmas carol, with the title officially changing to “Jingle Bells” just two years later.

The third president of the United States, Founding Father, and author of the Declaration of Independence refused to recognize Thanksgiving because he saw it as a day of prayer, which meant observing it as a national holiday went against a strong separation of church and state.

What are your favorite Thanksgiving facts for kids? Share in the comments below! Plus, check out these fascinating history facts for kids!

If you liked these Thanksgiving facts and want more articles like this, be sure to subscribe to our newsletters!