25 Quotes on Censorship for Teachers in the Resistance 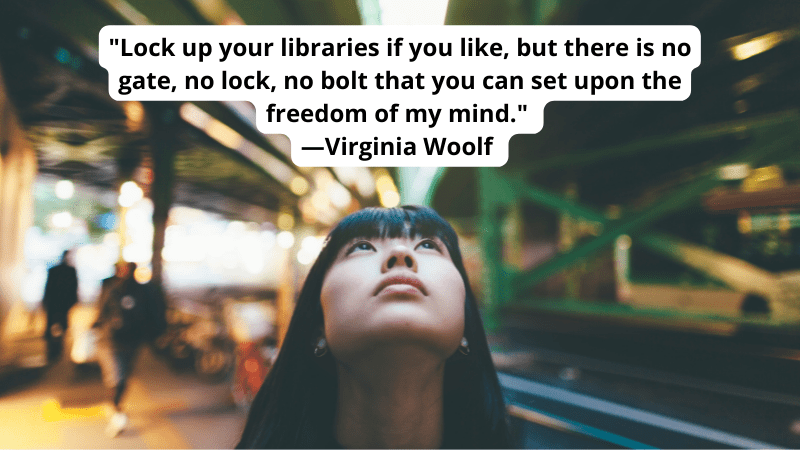 Maybe it’s the biological fieriness that comes with my being a redhead. Maybe it’s because I taught highly gifted kids for so long and their penchant for loopholes is now etched into my very being. Maybe it comes from my own teachers who encouraged intellectual discourse. Whatever the reason, there are few things I love more than a rebellious spirit.

As states and districts around the country implement more archaic (and frankly unconstitutional) guidelines for their libraries, teachers, and classrooms, I’ve been wondering how teachers can fight back. When they can’t speak up in their own classrooms with restrictive legislation or outside the classroom with non-disparagement clauses, it seems like teachers’ choices are either to stay and be silenced, or leave the classroom altogether.

Or is there a third choice?

What about staying … and resisting? What about finding ways to honor the humanity of your students that can’t get banned? Can educators continue to teach in a way that rejects the idea that we are made better by ignorance, sameness, and inequity?

They can outlaw your Black Lives Matter signs and the pictures of your spouses. But until they resort to banning written and spoken language, you can still use quotes that affirm the value of freedom, equality, diversity, and censorship. Because these quotes don’t contain the “woke” language on cheat sheets given to parents and district officials to sniff out offending teachers, these will sail right over the heads of anyone who becomes unhinged upon seeing a rainbow flag.

Here are some ways to use these quotes:

25 Rebellious Quotes for Teachers To Use in Their Classrooms

Note: I selected the quotes from this list from the International Federation of Library Associations’ (IFLA) wonderful compilation of quotes on intellectual freedom and censorship.

(“Who will watch the watchers?”)

“There comes a time when one must take a position that is neither safe, nor politic, nor popular but one must take it because it’s right.”

“Education is not the filling of a pail, but the lighting of a fire.”

“Only oppression should fear the full exercise of freedom.”

“Human beings are perhaps never more frightening than when they are convinced beyond doubt that they are right.”

“To suppress free speech is a double wrong. It violates the rights of the hearer as well as those of the speaker.”

“Freedom of speech and freedom of action are meaningless without freedom to think. And there is no freedom of thought without doubt.”

“The greatest threat to freedom is the absence of criticism.”

“I may disagree with what you have to say, but I shall defend, to the death, your right to say it.”

“Never do anything against conscience even if the state demands it.”

“You can cage the singer but not the song.”

“You can muffle the drum, and you can loosen the strings of the lyre, but who shall command the skylark not to sing?”

“I have always imagined that Paradise will be a kind of library.”

“There is nothing more frightening than active ignorance.”

“Lock up your libraries if you like, but there is no gate, no lock, no bolt that you can set upon the freedom of my mind.”

“The library is the temple of learning, and learning has liberated more people than all the wars in history.”

“Whenever citizens are seen routinely as enemies of their own government, writers are routinely seen to be the most dangerous enemies.”

“In Russia all tyrants believe poets to be their worst enemies.”

“No culture can live if it attempts to be exclusive.”

“Our lives begin to end the day we become silent about things that matter.”

“Never, ‘for the sake of peace and quiet,’ deny your own experience or convictions.”

“In the long run of history, the censor and the inquisitor have always lost.”

“There is more than one way to burn a book. And the world is full of people running about with lit matches.”

“You don’t have to burn books to destroy a culture. Just get people to stop reading them.”

What if you get criticized or reported for treasonous thinking? Easy. “Oh, I had no idea! Thanks so much for bringing this to my attention. Will take it down right away.”

You have thousands of replacements to choose from.

Which quote is your favorite? Let us know in the comments!

Everything You Need To Know About Using Bromelain For Inflammation

GHOST EVERYONE. GRIND IN SILENCE. SHOCK THEM ALL WITH SUCCESS. – Motivational Speech Compilation