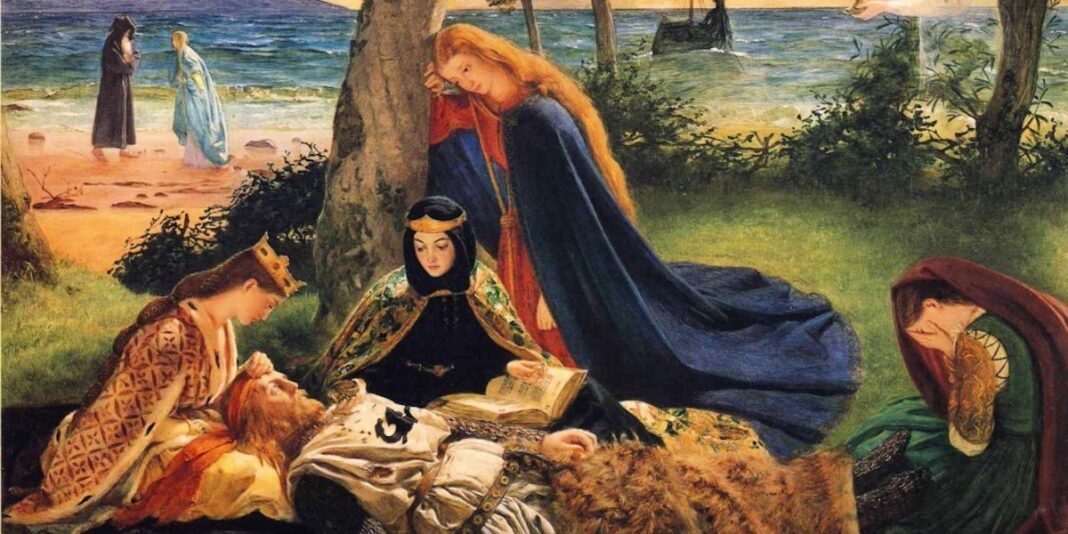 Isidore of Seville said, “Letters are signs of things, symbols of words, whose power is so great that without a voice they speak to us the words of the absent; for they introduce words by the eye, not by the ear.” The Medieval era signaled the beginning of an age where the lower classes demanded the ability to read and write in their vernacular. Everything we read and everything we write becomes a part of our individual nature. These 15 classic pieces of Medieval literature demonstrate this and should be read by everyone.

This the second in our four part series: Antiquity, Christendom, Modernity, and American History. Each post has 15 to 20 pieces of literature that helped define this time period. This list can also be used as a resource alongside Dave Raymond’s History series and many of these books and poems are included in our online lectures (British & World Literature and American Literature).

This titular character is one of the most famous in all epic literature. Beowulf, a legendary hero, fights and defeats a horrible monster, Grendel, who has been terrorizing a certain English king. Throughout the story, Beowulf’s strength and determination is put to the test over and over again as he battles various monsters.

The entire poem is written entirely in Old English, a language native to England before the Norman conquest in 1066. It is not dated but scholars believe it was written in the 10th or 11th century. Amazingly, all 3,000 lines are found on one single manuscript which can now be seen in the London British Library.

2. The Ecclesiastical History of the English People by Bede

Christianity’s history within England is fascinating and its genesis can be traced back to Rome. Beginning in 55 BC when Julius Caesar invaded the island, this written history traces Christianity through the different kings and people groups in England from the Romans until AD 731. Bede was a Medieval writer and teacher, one of the greatest and most influential of his day. He lived as a monk in St. Peter’s monastery in the kingdom of Northumbria in England.

3. The Canterbury Tales by Geoffrey Chaucer

Almost everyone has read sections of this famous piece of English literature in high school, but it is surprisingly interesting to read as a whole. Composed of 24 short stories, some are poems while others are prose. All are fascinating stories that describe various people of the day and age such as the the Knight, the Monk, the Physician, and the Shipman. Supposedly, these stories were some of the first to introduce English back into common literature since French and Latin were the primary languages used at the time.

4. On the Incarnation by Athanasius

Early church history is filled with debates over key doctrines such as the Trinity, the Creation, and Jesus’ divinity. Athanasius of Alexandria attended the First Council of Nicea in AD 325, a meeting initiated by Emperor Constantine. The Nicene Creed was established at this Council and Athansius was eventually elected bishop, stepping into the role of one of the most influential Church leaders of the fourth century.

On The Incarnation is split into sections that juxtapose or compliment each other. Creator-creation, goodness-grace, corruptibility-incorruptibility, and image-the Image are the four main pairs in which Athenasius lays out his worldview. His focus is to explain Jesus’s Deity and Manhood, how both are true and proven throughout Scripture. Weaving the Trinity throughout his writing, Athenasius eloquently ties our salvation to Jesus’s incarnation.

If not Shakespeare’s most famous play, Hamlet is undeniably his most well known tragedy. Ghosts, murder, intrigue, political drama, doomed love, madness, royalty: all this makes up Hamlet. Complicated to the last, the story of the tragic Prince of Denmark should be read by everyone. Is Hamlet really feigning insanity or has his mind really collapsed into madness?

6. The Inferno by Dante

Dante’s Divine Comedy is considered one of the greatest pieces of literature ever written. This epic poem consists of three parts: the Inferno, Purgatorio, and Paradiso. While each poem is spectacular, the Inferno is highly interesting because of who Dante puts in his version of Hell. One of the most interesting aspects of the poems is picking out famous characters from reality, literature, and Biblical times and what Dante thought of them based on their place in Heaven, Hell, or Purgatory.

St. Augustine of Hippo’s powerful conversion led to a theological career that shaped the rest of the Christian world. Once his worldview shifted from a focus on self to focus on God, a feeling of dissatisfaction with the world swept over him, forcing the theologian to really look at the Gospel message. Confessions is a type of poetic auto-biography that beautifully explains Augustine’s conversion and his specific sin struggles.

8. The Rule of St. Benedict by Benedict of Nursia

Monasteries spread across Europe slowly in the fourth and fifth centuries, taking root and attracting men from across the continent. In 1516, the Italian monk and theologian Benedict of Nursia composed a set of tenets for these new monasteries. This included dividing each day into sections for specific duties such as prayer, work, and sleep. St. Benedict’s work depicts the mentality and morals of his day in such a way that modern readers can comprehend.

Shakespeare’s historical plays are often overlooked and underrated. Henry V is a perfect example: filled with battles, romance, and political intrigue, it is a story that captures the imaginations of every reader. However, it is meant to be experienced visually; the best version is Kenneth Branagh’s 1989 film version, starring himself as the titular chracter, Emma Thompson, Derek Jacobi, and Christian Bale.

Poetry speaks across the decades, touching future generations with no connection to the world in which the poet lived. John Donne was born in sixteenth century London to a Catholic family unwilling to submit themselves to a Protestant government. He spent his life as a scholar and soldier who loved poetry, using it as a way to express his emotions and thoughts in a world filled with upheaval. Science, love, theology, and humor are common themes throughout Donne’s poems, moving readers to tears and laughter within minutes.

While Chesterton is not considered a Medieval author (he was born in 1874), he did contribute to Medieval literature in his apologetics book, The Everlasting Man. Tracing humanity’s journey from the Garden of Eden to the beginning of Western Civilization, Chesterton explains why Christ is who He says He is and why He is mankind’s only salvation. C. S. Lewis cites the book as incredibly influential by setting up his intellect for his future conversion.

12. The Talisman by Sir Walter Scott

If anything defines the Medieval Era it was the Crusades. Soldiers across Europe joined together to fight a series of religious wars against the Muslims who had taken Jerusalem. The Talisman is set during the Third Crusade and explores King Richard the Lionhearted’s relationship with Saladin, leader of the Muslims. Scott expertly describes how Richard and Saladin defined an era of Christendom by weaving history and literature together.

Arthurian legend has influenced imaginations for hundreds of years. Books, plays, and films have been written about different characters and events but none of this would be possible if not for Sir Thomas Mallory’s Le Morte D’Arthur. Tales of King Arthur and his knights of the Round Table had circulated throughout Europe for decades, romanticizing the real King Arthur of Britain. Sir Thomas Mallory compiles the fantastic myths into one volume filled with honor, romance, and war.

This French poem is considered one of the greatest pieces of literature to this day as well as the oldest surviving major works of France. Roland was a military leader during the Battle of Roncevaux Pass fought in 778 AD. Charlemagne was king of the Franks at the time: powerful and brilliant, he turned the Franks into a great people. It is a fantastic epic that depicts the Frankish army as fighting for Christianity and their God for their beloved king.

15. The Song of the Nibelungs (Nibelungenlied)

Germany did not produce many important contributions to literature in the Middles Ages with a few exceptions. The Song of the Nibelungs is one such exception. Originally written in Middle High German around 1200, no one knows the author. Siegfried, Gunther, and Brunhild are just a few characters in this fantasy focused epic. Heroism abounds throughout the story of the young Prince Siegfried’s adventures. He encounters royals, dwarves, and dragons in this wonderful and ancient coming of age legend.