10 Films About the American Government 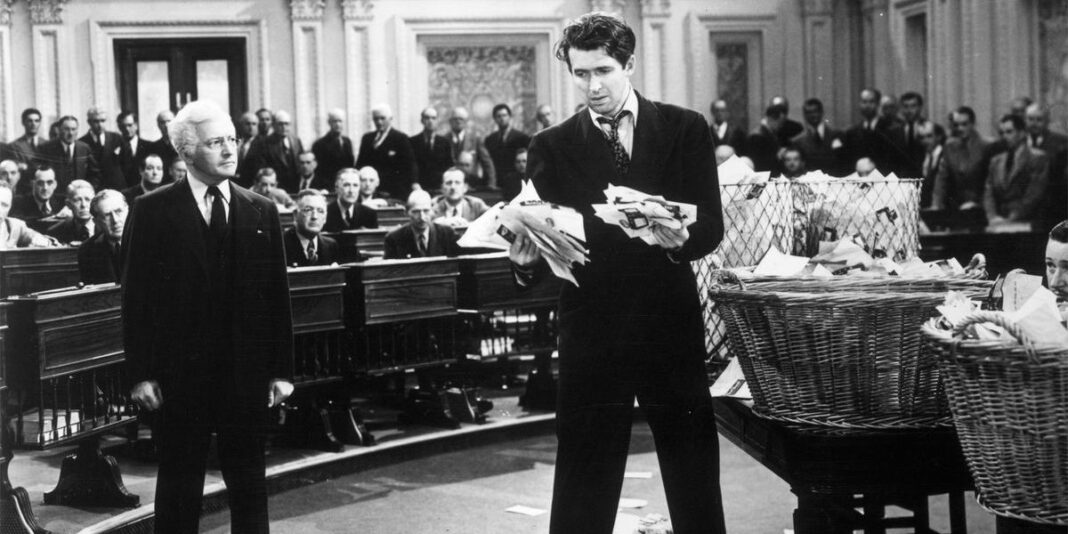 The United States of America has one of the most unique governmental systems of any country. Thanks to our Founding Fathers, the United States is the freest nation in the entire world, and if we, as her citizens, are not conscientious, we will lose that freedom. Every student needs to understand how our government works, from a state to a national level, even if it is only a general knowledge.

Hopefully these 10 films will help your students grasp the complexities of our governments and those who run it. This list can be used as a teaching resource alongside Dave Raymond’s American History and Modern World History series and Economics for Everybody.

Possibly the most obscure film on this list, Gabriel Over the White House is the story of Judd Hammond, president of the United States. Equally friendly and corrupt, Hammond is in a car accident that changes his life forever. The spirit of Abraham Lincoln and the angel Gabriel take over his mind, and Hammond begins revolutionizing the government. The film is odd and somewhat macabre, but an excellent choice to demonstrate the politics of the early 1930s.

Jimmy Stewart stars in this classic film dedicated to the process of democracy. Stewart plays the genial, soft-spoken leader of the local Boy Rangers chosen to replace a U. S. Senator who has just died. Despite his naiveté, Smith quickly realizes how corrupt his fellow senators are, as well as their policies. It is considered one of the greatest films ever made and perfectly depicts American morals and the duplicity of certain politicians.

In 1946, Robert Penn Warren wrote a political novel entitled All the King’s Men. As with so many famous novels at the time, it was snapped up by Hollywood producers. The story recounts the life of fictional politician, Willie Stark, a ruthless and ambitious man who will stop at nothing to keep control. The film won Best Picture at the Academy Awards, as well as Best Actor and Best Supporting Actress, and was an instant success. This is a great choice if your students are learning about America’s politicians.

My students like that Dave Raymond details the ‘why’ and not just the ‘when’ of historical events. ~ Judy

Considered the greatest film ever made, Citizen Kane was Orson Welles triumph and downfall. Welles plays Charles Foster Kane, a power-hungry, talented young man who quickly rises through the ranks of business and politics. The film is based on the life of newspaper baron, William Randolph Hearst, a choice which made the film and black-balled it simultaneously. Welles’ talent as producer, director, actor, and screenwriter was wide-reaching, but unfortuantely,  so was his hubris. Everyone interested in film or politics should watch this unique film.

Henry Fonda stars in this courtroom drama that focuses on twelve men charged with making the difficult decision of finding a teenage boy guilty of murdering his father or not. Filmed primarily in the jurors’ room, 12 Angry Men is an incredible film which should be seen by everyone at some point in their lives. It well encapsulates our justice system and shows why it is so unusual and important.

Andy Griffith is one of the most famous tv show actors from the 1950s. He is known for his wonderful portrayal of local sheriff of Mayberry. However, in 1957, he starred in a political drama as the power-hungry, two-faced Larry “Lonesome” Rhodes, a drifter suddenly thrown into the world of politics. The film gives the audience an unusual, if not exaggerated, look into how candidates are chosen, and how politics can destroy them.

In 1960, John F. Kennedy and Hubert Humphrey ran against each other in the Democratic Party primary election for President in Wisconsin. Though the film is technically a documentary, it provides good balance to the other films. Not only that, it is an interesting, first-hand account of how the American election system worked in the mid-1900s. It was a breakthrough in terms of documentary filmmaking, establishing filming techniques that are commonly used today.

Overall we enjoyed Modernity and I am seeing improvement in my teen’s discussion and critical thinking skills. ~ Alex

Starring Burt Lancaster, Kirk Douglas, Frederic March, and Ava Gardiner, Seven Days in May is a political thriller that takes place during the Cold War. Frederic March plays the President of the United States who is tasked with figuring out how to placate a negotiation with the Soviet Union regarding a disarmament treaty. Trouble comes when a military-political cabal reacts to this negotiation by planning to take over the American government. The film is a fascinating one due to its somewhat dystopian yet modern take on political intrigue and takeovers.

Robert Redford plays Bill MacKay, the easy-going, attractive son of a former California governor chosen to run against an unbeatable Republican candidate to save face for the Democratic party. MacKay is allowed to speak his mind on whatever he wants throughout the campaign since there is no possible way he will win. It is a political, comedy-drama that everyone in your family will enjoy and provides good juxtaposition to A Face in the Crowd.

Starring Robert Redford and Dustin Hoffman, All the President’s Men tells the story of the two journalists who are the initial investigators in the Watergate Scandal with President Nixon. William Goldman, screenwriter of The Princess Bride and Butch Cassidy and the Sundance Kid, wrote the screenplay, ultimately winning an Academy Award for it. Redford and Hoffman’s chemistry is incomparable, and they make a complicated subject palatable for a young audience.

Some movie links are from Amazon and as an Amazon Associate we earn from qualifying purchases.